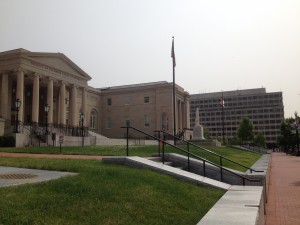 I tried to argue a while back that, when it comes to D.C.’s statute on Threats to do Bodily Harm, parking enforcement officers should be considered to be particularly immune to threats. After all, they are used to dealing with angry people who have just found a ticket on their windshield. Such officers, I would assume, are also trained both on ways to defuse the situation and on personal coping methods in the face of frequent abuse.

The defendant in High was arrested for unlawful entry. While seated on the curb in handcuffs, High “glared” at the police officer who was asking him questions. He then said to the officer: “take that gun and badge off and I’ll fuck you up.” A few seconds later, he added “something to the effect of, too bad it’s not like the old days where fucking up an officer is a misdemeanor.”

In an opinion written by Senior Judge Vanessa Ruiz, the D.C. Court of Appeals reversed High’s conviction for attempted threats. The court held that “simply because certain words are addressed to a law enforcement officer who is performing official duty does not necessarily mean that the utterance constitutes a criminal threat.”   High’s statements “are most aptly described as an expression of exasperation or resignation over the fact that the appellant had just been arrested by police officers for whom his family had ‘bad feelings’ based on prior experience.”   The court continued:

Appellant’s first statement – “take that gun and badge off” – is not a direct challenge or a “dare” to Officer Smith; appellant is not taunting the officer, or directly attempting to goad him into hand-to-hand combat. Rather, appellant is communicating that if Smith were not a police officer, then appellant would, in his words, “fuck [him]up.” Similarly, appellant’s second statement – referring with nostalgia to a time past (“too bad it’s not like the old days”) when assaulting a police officer was a misdemeanor – recognizes the increased penalty associated with inflicting physical harm upon a law enforcement officer as yet another reason not to do so. The statements convey both appellant’s anger at being arrested (in his view unjustifiably) as well as his appreciation that he is constrained by the officer’s status and potential criminal penalties from doing anything about it. Read together, appellant’s statement amount to a feisty lament, an “expression of [his] frustration over his arrest, rather than a serious threat of bodily harm” . . .

Nor do appellant’s statements reasonably convey a desire or ability to inflict serious injury in the future. Looking solely to the words spoken, it would be unreasonable for an ordinary hearer “to presume that appellant’s statement carried an implied future threat” that appellant would “hunt down” and visit physical harm on Officer Smith at a later time . . . Nothing in the statements uttered by appellant is a prediction or speaks to the future.

3 Comments on “High v. U.S.: Not Every Cross Word Directed at a Cop is Criminal”