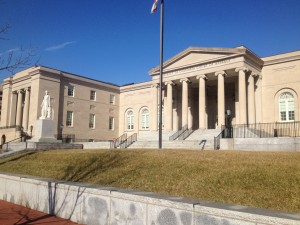 In Cheeks v. United States, a case issued a couple of months ago, the D.C. Court of Appeals interpreted the “interfere” provision of D.C.’s Assault of a Police Officer (APO) statute.  (It is illegal under this statute to assault, resist, oppose, impede, interfere with or intimidate a police officer who is performing his official duties, and the court has had to issue multiple decisions interpreting the statute’s many provisions.)  Most recently, the court issued an opinion in Jarrell Gayden v. United States, __ A.3d __ (D.C. 2014) in which it interprets the “intimidate” and “resist” provisions.  The opinion also clarifies the government’s burden of proof in an attempted threats case.

The police officer in this case was on patrol when he ordered defendant Jarrell Gayden to “move along” and “not to loiter.”  The two men apparently had previous history.  Gayden cursed at the officer as he started to walk away.  When the officer called for backup, Gayden became “loud and boisterous.” Gayden said to the officer:  “Are you calling for backup, I would if I were you before what happen[ed] to your partner happens to you[;]  you can get hit.”

Gayden allowed himself to be handcuffed when other officers arrived.  At that point, Gayden’s mother arrived at the scene with 20 or 30 other people who were yelling and screaming obscenities.  According to the officer, Gayden “continually to pull away . . . and was inciting the crowd, telling, screaming, get off of me, and other obscenities.”   Gayden also struggled and shrugged his shoulders.  He said something to the effect of “fuck the police, fuck you, Kimball, he’s always fucking harassing me, I didn’t do shit.”  The trial court concluded that Gayden both “resisted” and “intimidated” the officer.

The court overturned Gayden’s conviction for APO.  Specifically, with respect to “resisting,” the court concluded that “’the little bit of sort of wiggling and pulling away’ after Gayden had already been restrained in handcuffs without any resistance was insufficient to constitute ‘resisting’ under the APO statute:

To constitute resisting a police officer, a person’s conduct must go beyond speech and mere passive resistance or avoidance and cross the line into active confrontation, obstructions, or other action directed against an officer’s performance in the line of duty by actively interposing some obstacle that precluded the officer from questioning him or attempting to arrest him.  (Internal quotations and citations omitted.)

Nor was there sufficient evidence of “intimidation”:

Intimidation, by definition, generates fear or employs various forms of coercion short of physical force or injury.  To determine whether a defendant has intimidated an officer within the meaning of D.C. Code § 22-405(b), we ask whether any police officer in the officer’s situation would have reasonably been in fear of – and thus intimidated by – some obstacle that prevented the officer from performing his duties . . . under the circumstances of this case, the combination of the “little bit of . . . wiggling and pulling away” combined with the words spoken by Mr. Gayden and the onlookers, was insufficient, in our view, to establish intimidation.   (Internal quotations and citations omitted.)

The court did affirm Gayden’s conviction for attempted threats.   There was no doubt, it held, that “Mr. Gayden’s words were of such a nature as to convey fear of bodily harm to the ordinary hearing, and that Mr. Gayden intended to utter the words that constituted the threat.”  It is noteworthy, with respect to the split in the court’s opinions with respect to whether the statute requires a threat of serious bodily injury or just bodily injury, that in this case the court applied the more stringent standard of serious bodily injury, even in the case of a misdemeanor threat.

← Job Security is Not Always a Good Thing
#Serial: No Miscarriage of Justice in the Adnan Syed Case →