These Hours Undo Me 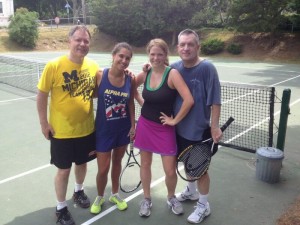 After dinner, my brother joins the younger generation in a game of Ultimate Frisbee. I opt to sit out of the game, joining our mother on the sidelines instead.

My brother used to be the organizer. There was not a game played at Cape Cod – a game of Scrabble or Kick the Can or Capture the Flag — that he had not set up.  These days the games take care of themselves. My brother and I are lucky if we even know about the game, much less get an invitation to join it. It is like that moment when my daughter first got her driver’s license. I was in the house when I realized suddenly that everything was quiet. My children no longer needed me to drive them everywhere.

Growing up, my brother was the best athlete on our street, the guy all the neighborhood kids wanted on their team. He was a star athlete in high school – the captain of three sports teams. He also played football and ran track in college. But whatever skills he may once have had pale in comparison with the athleticism of this next generation.

Of the thirteen grandchildren who have joined us at the Cape every summer for the past 27 years, we have had the top scoring high school soccer siblings of all time in Massachusetts, an All-American athlete, and a professional soccer player.  By contrast, watching my brother run up and down the field during the game of Ultimate Frisbee is like watching one of the old-time basketball greats – you have seen the old film clips — try to join into a present-day game in the NBA.  The film is black and white and grainy.  You have the feeling that our heroes of old would not fare quite so well were they to play today.

The thirteen cousins are talented and good-looking and clubby.  The conversation is intimate and fluid.  With years of Cape Cod summers, Christmases, birthday parties and graduations to cement the relationships amongst them, there is an ease in the way they deal with each other.  My siblings and I have created this group.  But we are no longer part of it. Woe to anyone who tries to join this clique without the proper entrée.

On our second day at the Cape, my brother and his daughter Rachel challenge my daughter and me to a game of doubles tennis.  Rachel is lanky and athletic and achingly beautiful.  As it is with my daughter Laura, you cannot believe that such a perfect human being came from one of us.  She is as dark as Laura is fair – the Rose Red, as my mother puts it, to my daughter’s Snow White.  Each of the girls has the coloring of her mother.

Laura and I win the first set 6-2.  I spend much of the time at the net, daring my brother and Rachel to hit the ball in my vicinity.  I am amazed by Laura’s play behind me, returning the volleys that I let pass.  At some point, perhaps while I was doing other things, my daughter has turned into a very good tennis player.

Of course my brother always has something up his sleeve.  It is not only his ability to improve his game at crucial moments; it is also the self-confidence and patience that used to frustrate me so much as his younger brother.  He would allow me to rack up just enough points that I could visualize victory.  Then he would dash those hopes with a comeback in the end.

On this day, my brother takes the long view with Rachel, insisting that she serve correctly even though this costs them points during the first set.  He would rather lose today if it means that she will be a better player tomorrow.  But Rachel is a quick study and my brother’s strategy continues to pay off during the second set.  Suddenly Rachel’s serves begin to fall.  They come back from a big deficit to win the second set.

We do not play the final set – my brother and I use the excuse of being too tired – so we will never know who might have won. It is probably better this way.  At least that is what we tell ourselves.

“These hours undo me,” is what my father once wrote.  I think of a blue beach umbrella pitched low against the sun and our thirteen children, younger then, building a sand castle at the water’s edge by our feet.  Following the receding waves, they move farther from us with every passing moment.

The tide will change. At some point, when the sun begins to dip beneath the dunes and the marsh grass throws shadows on the cooling sand, we will pack up our things.  We will leave the castles to stand or fall as they may.  Now let the water come.

← Pinning Down An Elusive Cop On Cross-Examination
Loser Walking →