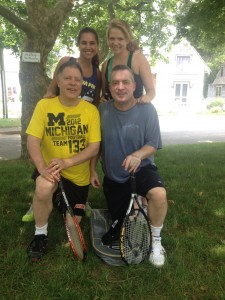 I have written for my brother’s law blog before and received a nice response. In fact, Jamie said my post got more responses than any of his own posts. One thing you must know about Jamie, or, to use his more professional sounding name, “Jamison,” is that he is the most appreciative brother you could ever have.  And what he finds to appreciate about you always rings with just enough truth that, although you may be skeptical at first, you nevertheless start searching within yourself for examples of it, find more and more evidence to support it, until  – lo and behold – it’s part of you.  A “self-fulfilling” truth some may call it.

We are at the Cape with our families. You may have read about these yearly gatherings in my brother’s most recent blog entry.  In fact he had asked me to write something to go along with his own post on our recent father-daughter tennis match.  You see, my daughters have not come to the Cape with me for the last few years. Last summer I did not come either, as I was in Florida with my new wife participating in a training program for our church.  “Oh, you weren’t here last year?” my brother jokes.  “I thought you were; it was our best year ever.”  So when my brother made his proposal for companion posts, I loved the idea and opportunity, and even started to imagine what I would say. I would give my own impressions of his beautiful – even angelic – daughter, Laura,  gracefully running the baseline to return yet another volley, and my frustration as I once more tried to get a ball by him at the net. I would write about my satisfaction at simply being there on the same court with my own daughter Rachel and seeing her smile at me when I did something right.  “I am not a good loser,” she said, smiling.  But for me it wasn’t even about winning or losing.  Simply playing together again was enough.  You see, her mother and I have not always seen eye-to-eye nor been able to communicate freely and openly.  John Milton, my father’s favorite English poet, posed the question: “Whoever knew Truth put to the worse in a free and open encounter?”  Sometimes in the process of divorce, free and open communication is what suffers even to the extent where it affects a parent-child relationship years later.

So now, after all these years, here we were, the summer of Rachel’s junior year at the University of Michigan, reunited at the Cape again, on the same court, even the same side, working in sync again.  How could I let her down now? When I started to bring us back in the second set to even the score, I did not know if I were simply fulfilling my brother’s vision of me, as he himself had written often enough of just this, or if I really was that older brother in possession of such confidence and power that he could indeed step up his level of play to meet the increased demands.  I will say that Jamie and Laura certainly did not choke, so maybe it was simply a matter of me not wanting to let my younger brother down and of him not wanting to let go of a childhood illusion. Then there is this:  While Jamie was congratulating Rachel and me and while I was shaking Laura’s hand, it suddenly occurred to me that the score in the second set was only 6-5. The comeback was incomplete! “Don’t you need to win by two?” I said while shaking Jamie’s hand.  Jamie examined this fact as he may have examined a piece of unwelcome evidence in a different sort of court and then came up with the verdict himself:  “No,” he decreed.  The case was closed, and this time I welcomed the decision.  My interpretation is that, for my brother, life is more than just a game with winners and losers. It’s an art.

Later I recruited Jamie for my team in a game of Ultimate Frisbee with the cousins.  The game had been going on for some time.  It wasn’t going exactly as I’d imagined; although we were on the same side this time, we were being beaten soundly.  While catching my breath at one end of the green, I looked up to see Jamie, with an unexpected burst of his old speed, run down the Frisbee thrown by his older son for a score. I was impressed.  But for the most part we found ourselves walking from one side of the field to the other with the battle cry of “Losers walk!” resounding in our ears.  During one such trek Jamie turned to me and said: “That should be my motto – ‘Loser walking.’” I added: “I’ll make sure it’s on your tombstone.”

Then it happened.  From very close a wild throw clocked Jamie in the eye. “You caught it!” his two sons, Jack and Bobby, marveled as his reflexes left him holding both the Frisbee and his face in his hands.  A little later he was seeing flashing lights.  I offered to take him to the Cape Cod Hospital ER, but his wife went instead.  So I played more tennis.  I went to the sidelines and called his cell phone.  I waited. I tried again. He had finally seen the doctor and was now on his way to an eye specialist.  My brother is a very strong person. He is a very caring man.  He is a family man and a true human being.  There is also a touch of nostalgia in his blog that at times I find appealing and at other times I want to knock out of him. It is what in his life has come to mean the secret of happiness – acceptance. Acceptance of the way things are, of the life and death cycle, of loss.  But for me, happiness is not acceptance.  It is overcoming known barriers towards known goals.  It has to do with an ancient eastern idea on the “cycle of action.”  There is an apparent cycle of birth, growth, decay and death, and then the actual one which is all creation – (1) create or “birth,” (2) create-create-create or “growth,” (3) counter-create or “decay”, and finally cessation of creation or “death,” only to be followed by a new creation or “rebirth.”

And so what I want to say to my brother, as I await word about his physical condition, and as he faces perhaps one more loss, a physical loss, is that there is more to life than what we see.  We aren’t just bodies, chemicals interacting, but spiritual beings who go on creating again and again, life after life.  Although our bodies may wear and tear and our physical prowess diminish, we have another chance, a future time in which we can improve, succeed even more worthily than we have this time around.  As a teacher  I am not just teaching bodies, but minds – and the mind is different from the brain because the brain is simply just another part of the body.  Anyone doubting this should go to the nearest grocery store and ask the butcher for some cow brains, grab it in his fingers and he’ll soon know what I’m talking about.  And even as I train minds, my brother, in working with the law, a law developed over many years, is working not only for the good of a society, but for the good of human beings who are creating or inheriting that society.  Both religion and science have existed for our own good. That both have been used in destructive ways is no reason to throw either of them out or to stop their development or application.

The spiritual side of life is what gives meaning to the physical side, but I’ve come to the end of my entry.  You see, I just heard the door to the Inn open.  I hear my brother calling my name – “Ray! Raymundo!  Where’s that assist you were promising me?”  Things are going to be okay.