Jackson v. U.S.: Being Nervous Does Not Mean You Are Dangerous 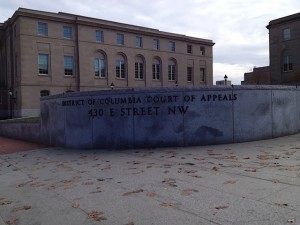 And sometimes the D.C. Court of Appeals gets it right.

A police officer sees a woman driving a van with what he believes are illegally tinted windows.  When he activates his lights for a traffic stop, the van pulls over immediately.  The van begins to “rock” with lots of “shaking,” and when the officer walks up to the driver’s side of the van, he now finds a male at the wheel of the car:  the two occupants of the car have switched seats.

The officer notices lots of hand movement in the dashboard area:  “it wasn’t anything normal you see on a traffic stop . . . something I hadn’t seen before or that I was not used to seeing . . . a lot of people when they do a lot of movement around usually they start to place weapons or try to retrieve weapons or what have you.”

The male, Tyrone Jackson, is “pretty forthcoming” in acknowledging that he and the woman had switched places after the traffic stop.  It turns out that she did not have an operator’s permit.  The officer orders Jackson out of the van “because of all the movement.”  Jackson denies having any weapons on him, and the officer finds no weapons on him after Jackson agrees to be patted down.  Jackson appears nervous and the officer can feel how hard Jackson’s heart is beating.

When backup officers arrive and secure the female, Jackson is handcuffed, placed in the backseat of the cruiser, and told he is not under arrest.  The officers then search the front passenger compartment of the van for weapons and recover a bottle of gin from under the van’s rear floorboard, a small hatchet beside the driver’s seat, and a couple of empty Ziploc bags.  The officers also recover numerous Ziploc bags containing cocaine from the cover of the horn of the steering wheel.

Charged with possession with intent to distribute cocaine on the basis of these facts, Jackson filed a motion to suppress the evidence on the grounds that, because police did not have reasonable suspicion to believe that they were dealing with a dangerous person, their search of the van violated the Fourth Amendment’s prohibition against unreasonable search and seizures.  The D.C. Court of Appeals agreed, and in Tyrone Jackson v. United States, 56 A.3d 1206 (D.C. 2012), it reversed the trial court’s denial of Jackson’s motion to suppress.

The Court acknowledged the trial court’s concerns about officer safety:  “It is beyond question that police officers face untold dangers when they conduct traffic stops.”  At the same time, focusing on Jackson’s hand movements around the dashboard as the “knife’s edge” of its decision, the Court concluded that the movements were “not sufficient to arouse a reasonable fear in Officer Nelson that Mr. Jackson was presently dangerous, as there was nothing particularized about the gesture indicating he was hiding or retrieving a weapon.”  It is one thing, based on D.C. case law, if the suspect had been conspicuously reaching under the seat. In that case, there is a “link between the nature of a particular gesture and a likelihood that a person making the gesture is armed.”  It is another thing, however, when the suspect engages in “less distinct bending movements or movements toward the dash, the console, or the passenger seat.”  In that case, “some additional fact is needed to get from the defendant’s conduct (or his nervousness) to his likely being dangerous.”

Because the Court invalidated the search on the grounds that police did not have reasonable suspicion to conclude that the vehicle’s occupants were dangerous, it never reached what could have been an even more interesting question; namely, whether the officer’s search of the van ran afoul of Arizona v. Gant.

3 Comments on “Jackson v. U.S.: Being Nervous Does Not Mean You Are Dangerous”