A driver who is pulled over by a police officer in Washington, D.C. for suspicion of DUI, DWI, or OWI can refuse to take a breath, blood or urine test if the driver has NOT been in an accident.  However, under D.C.’s “implied consent” law, such a refusal will result in an automatic suspension of the driver’s operating privileges for a year.  (Driving in the District is considered a privilege, not a right.  The mere act of driving a car in D.C. implies that, in return for this privilege, the driver has agreed to submit to a chemical test.) 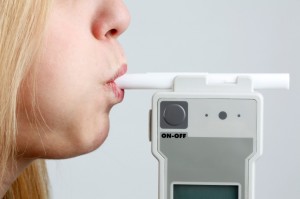 The driver cannot refuse to take a chemical test if involved in an accident AND the police officer has reasonable grounds to believe the driver was under the influence while operating the vehicle.  In fact, in this instance, the officer can even administer the test forcibly.

If the driver is unconscious or otherwise incapable of refusing the test, the police officer is permitted to administer it.  The driver can later prevent results taken in this manner from being admitted against him or her in court.  However, exercising this right will also result in an automatic one-year license suspension.  D.C. Code §§ 50-1902, 50-1905, 50-1906.

Any person who operates a motor vehicle within the Commonwealth of Virginia, whether licensed in Virginia or some other state, is considered to have consented to provide a blood or breath sample, within three hours of the driving, if pulled over under suspicion of DWI or DUI.  In addition, unlike in D.C. and in many states, the driver does not have the right to “unreasonably refuse” to submit to the test.  A refusal can be admitted against the driver at trial as evidence of consciousness of guilt.  It can result in the revocation of the driver’s operating privileges.

Finally, an unreasonable refusal within 10 years of a prior refusal or DWI conviction is a Class 2 misdemeanor punishable by up to 6 months confinement in jail and a fine of $1,000.  An unreasonable refusal within ten years of any two prior refusals or DWI convictions is a Class 1 misdemeanor that could subject the person to a 12-month period of incarceration and a fine of up to $2,500.  Virginia Criminal Code §§ 18.2-268.2, 18.2-268.3.