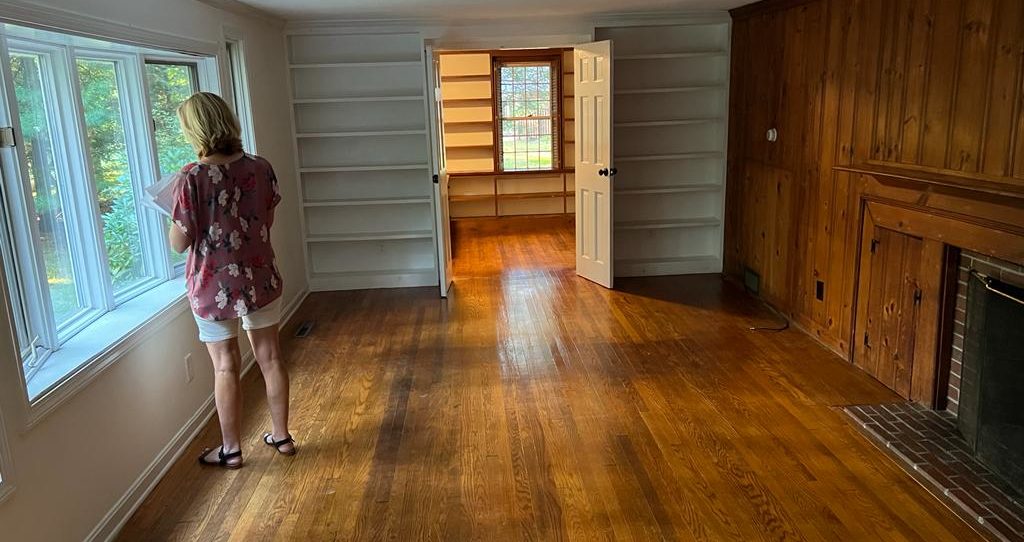 My brother Ray picks me up at the train station in New Haven.  We are headed to Amherst, Massachusetts, where we will be joined by our three sisters.

Our family home – the house my parents built almost 70 years ago and where all 5 of us grew up – has been sold.

We are going to visit the house one last time to say goodbye.

This was my idea, and I had to pressure a few of the others to participate.  Two of my sisters are local.  But the third – Mary Anne – has to fly in from Michigan to join us.

My hope is to bring closure.  This is an expression I am sure my father, a former English teacher, would have hated.  Instead of the regret I now feel whenever I think of the house, I will remember a pleasant last day spent there with my siblings.

Ray is five years older than I, and I have loved and admired him my entire life.

He was the leader of our neighborhood gang.  He was a three-sport athlete in high school and winner of the scholar-athlete award.  In college he was president of his fraternity.

College friends said they liked and respected him.  But they never really knew him.

Like my father, Ray can be distracted and preoccupied, his thoughts often elsewhere. Walking through Amherst with him, I have to identify for him all the people who wave at him.

But politics have come between us over the past 4 or 5 years.

We disagree on the challenges facing our country, and our differences are fundamental.

I am baffled by his views.  I cannot respect them.  As a result, whenever I feel angry at something I read in the paper or see on the Internet, I want to direct this anger at him.

You seem to do a lot of yelling, my wife says after overhearing one of our conversations.

But this anger seems to disappear whenever I see him in person.

Ray and I talk by phone the night before our trip to Amherst to arrange the details.  He is intrigued by a recent development in the news – what he refers to as “Biden’s red speech,” a reference I can only assume he got from Fox News – and we agree that we will wait to discuss politics until we have more time in the car.

But at least I listen.

Only once have I ever seen my brother with tears in his eyes.  That was the day of my wedding.  My brother – also my best man — poked his head out from the room at the back of the chapel to watch as my wife and her father emerged from the limousine.

But I have never seen him really angry.  He tends to absorb insults.  He retreats.  He attempts to understand where the other party is coming from.

And this is no different.

We sit in silence for a moment after I have uttered these words.

The five of us gather at Maggie’s house where Maggie feeds us lunch on her front porch. We then get into two cars, along with Maggie’s significant other Jim, and we head to Hills Road.  We want to visit the house and then Wildwood cemetery, just across the street and where my parents are buried, before it gets dark.

We read my father’s poetry at different parts of the house and yard.

This, again, is closure.

On the side yard, for example, Maggie reads Croquet of Sorts, a poignant poem on how our expectations do not always match reality.

The yard on this side of the house is where my father flattened down and watered the snow to make an ice skating rink, putting on his snow gear and heading out into the cold long after the rest of us – first his children and then his grandchildren – had lost interest in the rink.

This is where I stood next to Ray as his best man when he and his first wife were married.

This is also where Mary Anne and her husband George had their wedding reception.  The five of us spend some time on our hands and knees trying to find the metal part from the tent pole the rental people accidentally left behind in the grass.  We cannot find it.  Later, George tells Mary Anne that our father had a system for finding the metal piece: You had to start by a certain tree on the far side of the lawn and then take a given number of paces toward the house.

Next, on the patio that my father built brick by brick, I read Notwithstanding.   It is a wonderful poem about the house and the yard and the daffodils he planted and then forgot about and the “possible we held so briefly to”:

Intention past our own capacity,
the wish beyond all reasoning was there,
caught up by now in some greater plan
as we in summer dreamed, and labored through,
and in the autumn let the winter come.

We linger in my father’s study with its wooden bookshelves, a room Sylvia Plath once compared to the inside of a walnut.  The Sylvia Plath story is something I repeat as often as I can.  It is a piece of family lore I am hoping will be passed onto the new owners of the house.

As we gather in that room, Jenny reads the Fact of Fall, a poem inspired and written at the very spot we now stand.

Finally, we head out to the pasture behind the house, where we used to have to shoo away the cows so that we could continue our game of touch football.  You also had to be careful not to step in a pile of fresh manure.

There Ray reads our final poem for the occasion, Aging Bronze.  Inspired by playing football with Ray out on this field, this is a poem that my father wrote to his own father, telling him of the father-son tradition that passed to the next generation:

Dropped passes fill my evenings, but he,
that young man stretched to touch
the last rays with his fingers,
hears cheering where he falls
in darkness, holding the ball.

A couple of years ago I found an early draft of the poem among my father’s papers and had it framed for Ray.  It now hangs in his study in New Haven.

Walking out onto the field, Ray and I disagree about where exactly the thorn bush referred to in the poem was. But the sapling we used as a first-down marker is now a full-grown tree.  There is no mistaking its location.

Ray pauses briefly during his reading of the poem to collect himself.

It was not easy growing up as the younger brother of someone with such a promising future, and I still have ambivalent feelings when it comes to my father and what I believed was his favoritism toward Ray.  It was not that my father didn’t love us all equally.  He did.  But he seemed to relate to Ray in a different way.

Once, during a family game of soccer on that very field, Ray captained one team and I the other.  Why, I complained to my father, are you so clearly rooting for Ray’s team when everyone out on this field is either your child or your grandchild?  You should be neutral.  You should be rooting for both teams.

That is a superficial example; it went deeper than that.  And, although I am sure this affected my sisters too, I think it was most difficult for me as the other son.  It affects your self-confidence.  You feel somehow less than.  Nobody wants to come in second.

It wasn’t until just recently that I realized that this was more than just an oldest son thing.

Discovering a recording on the internet of my father’s interview with William Carlos Williams, I realized that my father – the timber of his voice and his earnestness as a young man – sounded almost identical to the Ray I knew growing up.

In other words, Ray may have been much more like my father than any of the rest of us.  It may be that my father simply identified with him more.

My father understood the significance of occasions, and of saying goodbye:  “In Palatka once” he wrote, “beside the taxi place you stood and hardly walked and we came back to hear goodbye, what it means to be blessed.”

We had an elaborate routine we called the Koehler goodbye.  Everyone would gather out on the street at Hills Road and wave at the departing car all the way down the street until it turned the corner by the Skillings’ house.  It was best if it was very cold and you were shoeless or still in your night clothes.

Ray would have some fun with this whenever he was the person departing.  He would stop at the bend and continue to wave.  Or he would veer off the road wildly as if his waving had rendered him unable to control the car.

Ray drops me off at the train station in New Haven. If I felt my father’s presence in the house, I feel it again as we say goodbye.

My brother and I stand facing each other at the back of his car, the trunk still open, and contemplate each other for just a moment before we embrace.

My brother and I have both gotten old and gray but Ray has lost weight recently, and his body even feels like my father’s.

“It is almost as if I am hugging Dad,” I say when finally we release each other.

“Okay then,” he says, and embraces me again. “This one is from Mom.”

Amazingly enough, it also feels like my mother.  Suddenly she too is standing with us.

This hug is even longer.  Finally we release our grip, and I gather my bags and head toward the station.

I turn back when I reach the doors to wave one last time at Ray. His car has not pulled out from the curb.  It does not veer or stop at the bend.   Instead, behind the morning sun glinting off the windshield, I can see the flicker of his hand above the steering wheel.

This is why we say goodbye.  Letting go is what it comes to. We let go so that, as in my father’s poem, autumn can yield to winter.

← I told you so
As-salamu alaykum.  Have a blessed day. →