A Classicist’s Take on “Trump as Tragic Hero” 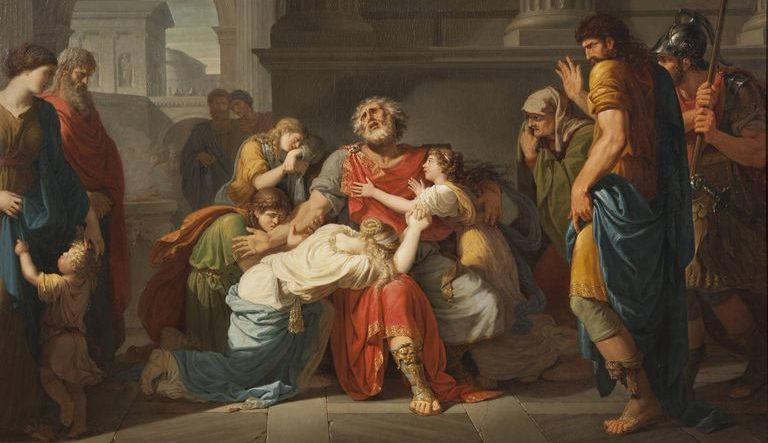 I enjoyed my brother’s “Trump as Tragic Hero” so much that I wanted to offer a classicist’s point of view on the subject in hopes that it would qualify as a guest entry to his award-winning law blog. The issue here is whether Donald J. Trump is a “tragic hero” in the classical, or “purist,” sense of the word. In this Age of Transparency, most notable perhaps for the Herculean effort each side makes to point out the other’s lack of it, I feel it necessary to issue a warning: Although this is strictly an expository piece of writing – not a persuasive one – the author’s own bias may, despite intense classical training, occasionally seep through. With that caveat issued I can now proceed knowing that you, the reader, are solely responsible for whatever conclusions you make. And I promise that whatever catharsis or “purging of emotion” this comparison of the classical with the modern “tragic hero” evokes, it will be done without the inclusion of material that may be deemed controversial – not that controversy is bad, but because it is not included in Aristotle’s Poetics when describing the elements of tragedy. Even worse than that, it could interfere with the comparison which is the purpose of this blog post.

The classical tragic hero as cited by Aristotle is of course Oedipus, whose crime of killing his father and marrying his mother may or may not be worse than any crime President Trump may or may not be prosecuted for after leaving Washington, if he leaves. Oedipus, on the other hand, having cut down the ropes from which his wife had hung herself, puts out his own eyes with the pins that held her clothing together and then emerges from the palace begging Creon, his successor, to banish him from Thebes and send him into exile. That in itself seems at variance with what we are witnessing today, but perhaps that is only because I am comparing the conclusion of the Greek tragedy with merely the end of Act I in our Washington play.

In his Poetics Aristotle says that as with any art form tragedy imitates life. Although this means it should relate events occurring in the real world, this fact alone would not be enough to disqualify Trump by those claiming he lives in an alternate universe. The determining factor is whether or not we, as fellow Greek citizens sitting in a stone theater, can imagine these events as taking place in the real world. This idea of art mimicking life, found here in Aristotle’s Poetics, has had a huge impact on succeeding generation’s understanding of art in general and may be the source of Shakespeare’s “All the world’s a stage” from his comedy As You Like It. However, neither comedy nor this digression belong in tragedy, modern or classical, so let’s leave both and return once again to the archetypal Greek work. After all it was from Sophocles’ Oedipus Tyrannos that Aristotle worked out these elements of tragedy for himself and the world.

Besides unity of subject matter and action in the real world, the plot takes the hero and audience from a very high point to an extremely low one. “Who can be called more unfortunate than you, Oedipus?” the chorus laments following Oedipus’ great reversal of fortune. But this dramatic fall is not precipitated by an invading army, a plague, or even the death of a child. The key element separating a tragedy from Tragedy is “hamartia.” “Hamartia” translates to English as “error” or “tragic flaw.” Jamison’s post argues that in Trump’s case this would be his narcissism that results in that blind spot which prevents him from seeing the truth, whether that be the truth regarding his actions as a father and husband, a President, the size of a crowd, or the result of an election.

Oedipus’ own form of hubris is perhaps a different version of this. It was an excessive pride that led him to abruptly leave what he believed to be his home and parents in Corinth to avoid a Delphic oracle that foretold how he would kill his father and marry his mother. A less prideful son may have returned home to talk to his parents. This would have allowed them to tell him the truth – how a shepherd found him abandoned on the mountainside and left to die, how they themselves had not been able to conceive and how they had lovingly taken him in to make him their own son and heir. But instead this hot-headed young man, unable to accept that this could happen to him, did not go home after leaving the oracle, but headed for Thebes. His self-righteous anger blinded him to the fact that he may have committed a crime when, at a three-way crossroads, he killed a man headed in the opposite direction during a heated dispute. He must have felt pretty justified because it never occurred to him that he could have been the king’s murderer when he finally entered Thebes after solving the famous riddle of the Sphinx and beheld a city in mourning for the recent loss of their king. Instead he married the widowed queen. It certainly wouldn’t have occurred to him that the same man he killed could have been his real father or the woman he married his mother.

But there is another factor here which may simplify things when deciding whether Trump is a tragic hero. This factor is the quality of likability. Aristotle says that a tragic hero must be good and that this goodness is an ethical goodness. Blameless goodness is not all that interesting. I’m sure you can think of a Washington politician or two that could serve as example. Undeserved suffering does not give rise to the pity and fear which characterize tragedy. However neither does the ruin of an entirely bad man. That is why if you are convinced of Trump’s racism or lack of humanity you will have some difficulty arguing he is at the same time a true tragic hero. The essence of tragedy is the pathos it draws out in each of us beholding the spectacle of a flawed but otherwise good, moral man battling with a fate he has brought upon himself.

There are a few more elements of tragedy I could cite, but I will end with one more that may be a determining factor. The word Aristotle uses for this is “anagnorisis.” This is the moment of recognition, that moment the hero sees what has gradually become obvious to everyone else. This is that excruciatingly painful moment when Oedipus’ concentrated, relentless search for the source of his city’s scourge leads him – this master investigator, solver of riddles, the one to whom the people have turned for answers to the corruption and relief from the pestilence ravishing the land – inexorably back to himself.

Again this sort of self-discovery is something some would argue Trump is not capable of. Yet this is the defining moment of a classical tragedy. Without it there is no catharsis and yet it is this catharsis that unites an audience by putting them through such an unimaginably intense experience that they then experience the relief that restores this sense of wholeness, such as can be felt after a good cry. Only then is there a lifting of the great scourge upon the land and return to normalcy – perhaps even an improved normalcy. Imagine where we might be as a people if instead of suffering through an actual civil war, we could have overcome the scourge of slavery by watching it on stage as Greek Tragedy. Imagine if we could have experienced that same relief and wholeness the ancient Greek audience felt when leaving the theater in 429 BCE after this tragedy was first staged. A good catharsis should lead to a sense of freedom, the ability to go forward and to forge an even better future.

But before too rashly concluding that Trump is not a modern example of the classical tragic hero because he lacks this ability of self-examination and self-discovery that is such a key part of creating the tragic effect, we should consider that the Sophocles’ Oedipus tyrannos suggests there are two Acts still to go. For example, in Act I Oedipus, like Trump, also struck back at his detractors. When the blind seer, Teiresias, told Oedipus the truth about who and what he actually was, Oedipus not only threatened him with exile and bodily harm, but also threatened Creon – his own advisor and relative living with him inside the palace – with the same punishment for secretly plotting against him.

We also should not overlook the “We love you” refrain sounded by attendees at Trump rallies that suggest an emotional bond for Trump even stronger than the one expressed in the refrain sounded by the chorus of Theban elders, which translate to “I can think of no other man more honorable than you in our great city of Thebes.” But whichever conclusion you make, you may need to remake. As you can see, the second act is now beginning. I will say nothing more for fear of leading the chorus or
tampering with evidence. I’ll just return to my place here in everyday life next to you – unless, of course, you are involved in the drama. It’s a bit difficult separating the actors from the audience in this theater without curtains. But my, these stone seats are hard!

A shiver just ran down my spine. Does that mean I already have a glimpse of what is to come? Are there more horrors to be brought to light before this tragedy is done? Is it indeed a tragedy? If so will our hero in question be a real tragic hero or some other sort of hero. Will we be able to at long last experience that catharsis that could take us away from civil unrest and to wholeness again? Wait, there he is – the protagonist – on stage, about to speak in the palace garden. And there’s Creon, the man he has accused of plotting against him. Meet me after the final act by the water fountain so we can talk.

← Getting the rules of evidence wrong in HBO’s “The Undoing”
D.C. Superior Court’s remote and partially remote courtrooms →