Your Desk, By The Window 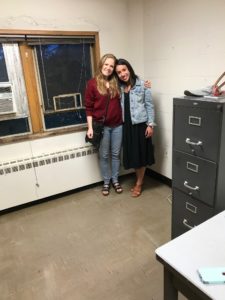 This is what my niece Meg says as she forces open a window on the first-floor and crawls into the building.  She comes around to the front door to let the rest of us in.  I am horrified.  I am also impressed.   I follow my sister and daughter into the building to join her.

We have just broken into Bartlett Hall at the University of Massachusetts.  For 60 years my father had his office here, first as a member of the English Department, then in retirement.   The building is now empty.  They are about to tear it down.

According to Google Maps, it is 1.1 miles from Bartlett Hall to my parents’ house on Hills Road. My father used to walk this every day.

There must have been some days in which he would have been more comfortable staying at home, in his bathrobe and with a cup of coffee.  The New England winters can be brutal, and his home study was cozy.  With its dark wooden bookshelves lining the back wall, Sylvia Plath once compared the room to the inside of a walnut.   But my mother liked to have my father out of the house at times, and he enjoyed the walk, even on the worst days.

A former student told my mother of driving up Clark Hill Road one snowy day to find my father lying by the side of the road.

Mr. Koehler, Mr. Koehler, the student said, getting out of his car to help my father to my feet. Can I give you a ride?

My father thanked him but declined the offer.  It really is a nice day for a walk, he said.

I don’t know how good a teacher my father was (I assume he was better with graduate students) but I do know the students liked and respected him.

We used to joke that you could go anywhere in the world only to have a student seek him out with a “Mr. Koehler, Mr. Koehler!”

Backstage at the Lollapalooza in 1995, my father is the only person in the entire stadium who is over 60 years old.  Apart from the bleached blonde bassist from the band, he is also the only person in a coat and tie.  The “Mr. Koehler, Mr. Koehler” person in this case is a roadie who accosts my father as we approach the stage:  Don’t you remember me from freshman English?  You gave me a B when I deserved an A.   My father never did believe in grade inflation.

Once inside of Bartlett, the four of us walk up to the fourth floor where my father had his office.  The small offices, cinderblock walls and metal office doors are familiar to us, but when we arrive on the hallway we struggle to remember which office was his.

My sister Maggie goes with her gut:  This one feels right, she says, and we step into one of the cramped offices.  The office is mostly empty now, with a metal table and filing cabinet pushed off to the side.

Apparently, in going through his things a couple of years ago, we missed a box of his personal papers.  Someone bought the box at an auction and contacted me.  I thought the guy was going to hit me up for some money.  As it was, I could barely talk him into accepting reimbursement for the postage.  The papers seemed important to me, he told me.  I thought you might appreciate them.

It was fun to find, along with letters and old photos, early drafts of some of our favorite poems by my father, poems that my siblings and I can recite from memory.   We have the draft, for example, in which he scratches out “gold” and writes in “bronze” in “Aging Bronze.”   “Snow” was originally entitled “Fourteen Inches.”

My father hated adverbs.   Adjectives too, for that matter.  Contrary to what many creative writing teachers might tell you, he also preferred the general to the specific.  He would say “stomach,” not “belly,” even if the latter was far more descriptive.  And he always took out any suggestion of sentimentality.

His only indulgence, as far as I can tell, is a poem he wrote after his father’s death, inspired by his experience cleaning out his own father’s study.  In “Your Desk, By the Window,” he writes of his inability to “think, or take, or touch things”:   “In the middle drawer/these envelopes, unused; letters/you did not write./Their whiteness is/the distance now between us;/differences;/ so many ways to fail.”

Meg does not share her mother’s certainty as to which of the offices belonged to her grandfather. So she pulls out her smart phone and produces a photograph.  It is of my father actually sitting in his office.  He is at his desk, by the window.

We search the photograph for clues.  We check the wall for markings consistent with the wall hangings captured in the photograph. There are also plants on the windowsill behind him, spindly-looking things because, to be honest, my father never had much of a green thumb. We check the wood for signs of water damage.

One of the things I learned from my father is an appreciation for the seemingly insignificant things in life.  It was not just the joy he took in finding the perfect word or turn of phrase for a poem.  He could spend days doing that.  It was tending to his yard, where the grass never seemed to come in just right, or the vegetable garden, where he planted an extra row every year, this one for the bunnies, he would say.  It was stooping over to pick up a penny on the street.  It was a stupid joke, with a corny punch-line, that would amuse him for days and that he would tell again and again.  It was the pleasure he derived from the snowdrops that pushed up through the earth on our front lawn every spring.

Even with Meg’s photographic evidence, we are still unsure.  Maggie who, along with my brother, cleaned out the office after my father died, sticks with her gut.  Meg and my daughter Laura look for the positioning of the tree limbs visible outside the window in the photograph.  We realize his office could have been a couple of doors down.

Although my father never complained, you have to wonder if he was ever disappointed with the way his career turned out.  Without an interest in departmental politics, he was never selected chairman of the English Department.  Nor was his poetry ever recognized in quite the way he might have hoped.

Emma – another of my nieces — went through William Carlos Williams’ papers while writing her senior thesis at Dartmouth.  There was a file with my father’s name on it.  Emma also discovered a letter Williams had written encouraging the poetry editor at a major publication to look at my father’s poetry.  My father was, Williams wrote, “a man of 40 who has just had some poems accepted by Poetry.  I was amazed by the excellence of his work.  Bear the name in mind and if you can place him among your acceptances I’m sure you won’t regret it.”  The letter was dated March 7, 1957.

Years later, going through my father’s things, we came across one of my father’s rejection slips, this one from the Atlantic Monthly.  The year was 1938.  “Not quite right for us,” the note said, “but please try us again.” We joke that 70 years is not too soon to give it another shot.

So many ways to fail.

We decide it was the first office, the one that felt right to Maggie, and the certainty makes us all feel better.  It was this one, we say.  It was definitely this one.

My father had a problem with goodbyes.  Whenever we said goodbye, he wrote, it was like this, and he never needed to explain what this was.  He thinks of tail-lights, the car braking at a curve, and the phone more quiet now.  Maybe this explains what my nephews and nieces call the “Koehler goodbye,” an extravagant spectacle in which everyone comes out onto the street to wave goodbye.  My brother could have some fun with this when he was the honoree.  He would veer off course or stop the car at the curb to prolong things.

Our break-in today, I guess, must be our four-person “Koehler goodbye” to Bartlett Hall.

Meg takes the small rectangular clasp from the front of the door.  She, the middle cousin, understands the significance of these things.  There is, of course, always the chance that this piece of metal once held an index card with my father’s name on it, identifying the office as belonging to him.  We will assume it did.  I add theft to my list of criminal offenses we committed today, but it doesn’t really matter.  The building is about to be torn down.  No one will miss what we have reclaimed.

“Bye Dad,” my sister says, with as much finality as she can muster.  Meg has her souvenir.  We shut off the lights and close the door.  We head back toward the exit.

← “He does not see the bend, behind, that will take him from view”
The Reconstituted CJA Panel in D.C. →

21 Comments on “Your Desk, By The Window”