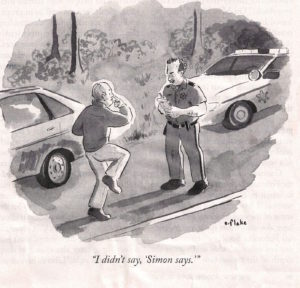 Q:            Officer. You testified on direct that my client was talkative when you first approached his car.

A:            While he was in the car, he was just, he was very talkative as I believe I said, he kept repeating himself. His speech was slurred. He wasn’t directly answering questions. He was uncooperative.

Q:            You have just repeated yourself a number of times, Officer. Are you impaired today as you sit on the witness stand?

← An Ethical Prosecutor Confronts Her Own Witness
“No Questions, Your Honor” →