“When Beggars Die, There Are No Comets Seen” 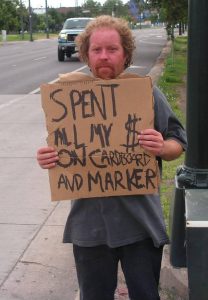 My wife believes in helping out those who are less fortunate.

If I were to ever run for office, I would have two planks on my platform. The first would be for more public restrooms. (We older men have our needs.) The second would be to rid the city of this blight.

Some of the traffic light panhandlers are aggressive. One guy working the intersection of North and Mt. Royal pounds on the driver side window and demands money. On the other end of the spectrum is the friendly panhandler at Martin Luther King and Route 40. She smiles and waves and thanks you even when you decline to oblige.

I am with my wife one time when I see the smiley panhandler squatting down by the traffic island. I look closer to find that she is refreshing her makeup. Look, I tell my wife sitting in the passenger seat beside me. But my wife is on the phone. By the time I get her attention, the woman has put her makeup kit away and has resumed her cheery circuit between the cars.  My wife laughs at me.  She is amused by my churlishness.

And, of course, there are the panhandlers with a sense of humor. “Bet you can’t hit me with a quarter,” is the challenge on the sign of one wag. “Give me a dollar or I will vote for Trump” says another. And my favorite: “Spent all my money on cardboard and marker.” Or its variation: “My wife done up and left me. She took everything but this sign.”

It is not that I will never help out a fellow citizen in need. There is an older man who plays a guitar outside the Chipotle on Charles Street. There are three strings on his guitar and his singing is awful. But he is not obstructing traffic or imposing himself on us. At least he is trying. I give him extra, as if it compensate for my miserliness with respect to everyone else.

Finally, there is the young man I see every morning on my drive to D.C. trudging up Martin Luther King in the opposite direction. I could set my clock by his whereabouts in relation to his destination. If he is already at his post — the intersection with Lafayette – I know that I am running late. I have my workplace, my work ethic and my routine. So apparently does he.

← Body Worn Cameras in D.C.: Watching Events Through the Eyes of Police
Love Letter to a Prosecutor →