A Criminal Defense Lawyer Gets Mugged 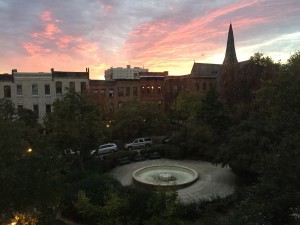 I am hit so hard that my boot flies off as I fall backward. The boot slides across the bricks out onto the street. Our dog scampers after it.  She thinks we are playing.

I should have seen the three young people – two males and a female – standing on the corner in the dark waiting for me.  But I am lost in my thoughts, and they are upon me before I can do anything.  Damn, I think.  I can’t believe this is happening.

Wayne my investigator has told me I should carry a single $20 bill in my pocket.  You hand this to them, he explained, and send them on their way.  I am already regretting that I did not take his advice.

I stay on the ground.  They calm down as soon as it becomes apparent that I am not going to put up a struggle.  It is like putting your hands in plain sight on the steering wheel when pulled over by the police.  The adrenaline is already leaving our bodies.  The dog uses this opportunity to sniff around.

I have represented so many juveniles in crimes exactly like this one that I feel as if I know these kids. Tough talk. A burst of violence. And some swagger. Deep down, however, most of them are really sweet, vulnerable children.

The tall one, the one who hit me, leans in over me. Give it up, bitch, he says.  Resigned, I take out my wallet and open it up, showing him that I am handing him all the cash.  I don’t want to replace the credit cards.  I don’t want to spend another day at the DMV.  He pockets the cash and starts to leave. Then the other male steps up. And the phone, he says.

I collect myself as soon as they run off. A neighbor walking his dog comes over to make sure I am okay. There is swelling on my face, and my body will be sore for a couple of days.  But the only real damage is to my dignity.

Back at the house, using my wife’s phone to call 911, I pick my words carefully. How many times have I replayed one of these calls as a criminal defense attorney looking for any hesitation, any inconsistencies, any weaknesses in the government’s case?

My neighbors are upset when they learn that neither I nor the police used the GPS on my I-Phone to track my assailants’ movements while they were still in the neighborhood.  At the same time, I know this case will never go to trial.  If I have ever questioned the accuracy of eyewitness identifications from a professional standpoint, I now know it from first-hand experience.  There is no way I could ever identify any of the young people who assaulted me.  The police officers who interview me seem to understand this. Cross-racial identifications are particularly problematic.

I am walking the dog again the next morning when I run into our neighbor from a couple of doors down. She has read about the assault on the neighborhood listserv. She uses the GPS location on my stolen phone to track its location.  It is now moving back and forth at an intersection in Baltimore County about 10 miles away. She also hails down a passing police officer and, when he refuses to do anything about it, contacts our recently re-elected councilman to urge action.

A group of three juveniles with the same gender mix have been involved in all sorts of mischief recently in our neighborhood. So I understand the need for police intervention. We need to protect our home values and our safety. I also admire my neighbor’s faith in the criminal justice system. But I know better. Even if the Baltimore City police were able to coordinate with the Baltimore County police and track down whoever is now in possession of my stolen I-Phone, without an identification from me, the most anyone could ever be charged with is the criminal offense of receiving stolen property. The chances are also pretty good that my phone is now in the hands of a third party.

My neighbor continues to track my I-Phone for the rest of the day. The signal goes silent at around 3:00 pm.  She picks up the signal again at around 3:30 and is pleased to see the phone heading down I-83 toward our neighborhood.  Aha, she thinks.  Now we got you. Then she realizes the person she is now tracking is me.

Having spent a couple of hours at the Apple store in Towson, I am happy to have my new I-phone. I am moving on. If there is one thing I have learned from this experience, it is to listen to Wayne. The next time I walk our dog at night, I will stay in open, well-lit areas. I will keep my wits about that me.  That is the cost of living in a city like Baltimore.  I will also carry a single $20 bill.  I will hand it to them.  I will send them on their way.

← Feedback from Jurors After Trial
What It Means To Be Heard →

17 Comments on “A Criminal Defense Lawyer Gets Mugged”