“Your Breath to Keep Me Up” 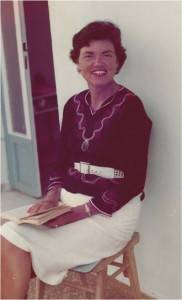 Many years ago, our mother had to go to the hospital, and it took the doctors a long time to figure out what was wrong with her. During that time, she was running a very high fever and was delirious. She was also being uncharacteristically difficult. They took her children out in the hall separately to ask us questions.  We realized later they suspected that she was also suffering from alcohol withdrawal.

They interviewed Ray and me together. No matter what the questions were, they kept coming back to her drinking habits. Yes, Ray said, she did occasionally have a glass of wine with dinner. He put his thumb an inch from his pointer finger to show them just how small the wine glass was. Their eyes lit up. They were convinced they had the found their answer.

Ray and I could only laugh. It was funny for us to think that this daughter of a tee-totaling Presbyterian minister had a drinking problem. Of course they finally figured out that what she really had was pneumonia.

The point of all of this was this: During the time she was delirious, she couldn’t tell you who the president was. She couldn’t even tell you what year it was. But no matter how crazy my mother appeared to be, she never forgot – for even a moment – who her husband was, who her children were, and who her grandchildren were. And the love she had for all of us – even at the height of her delirium – was palpable.

My mother never lost that love.

Ray and I came up to Amherst just a couple of weeks ago to see her, and I spoke with her on the phone the day before she died. She had lost her appetite. And we couldn’t coax her out of her bed. Mom, Maggie said, you have to eat. You have to move. (Maggie has always been kind of bossy.)

But she was happy. She was reading her kindle. She told Maggie that she enjoyed lying in her bed, just thinking about us all. She was at peace. And no matter what else that was going on with her, you could feel that love – that mother’s love – coming from her.

Her love extended well beyond her family.

She loved this church and all her friends here. She and my father were members of the church for over 60 years. She served as director of children’s studies back in the early 70s. Dick thinks of her sitting over there on the left. I like to think of her in the front pew because that is where she and my father sat during the weddings of all three of their daughters.

She loved Muskingum College. She went there and many of her cousins went there. Her grandfather and uncle both served as presidents of the college. She was very proud of that fact.

She loved her enormous community of friends here in Amherst. She loved her bridge club of over 60 years. She loved her poetry club. She loved her bible study group. And her family benefitted last night from the generous food and drink provided by the travelers club. Thank you very much to the club for that.

She loved Hills Road. She helped the organize the annual block party many years ago. In later years, it was very comforting for her children to know that she had the Ralphs on one side, the Snoeyenbos’ on the other, and Cliff Wilkinson across the street.

Our mother also loved to tell stories. And she was a great storyteller.

She knew to take her time, to relish the details. She always took lots of detours – to explain a particular relationship or to note something that might be of interest. Sometimes it was of interest. But she always got back on track. She always knew where she wanted to end up. And it was fun to hear the same stories over and over again. There is something so reassuring about the predictable.

Her favorite story, of course, was the one about her father being taken captive by the Germans during the First World War. At the prison camp, he met a Red Cross nurse who, taken by his blue eyes, slipped him a rabbit under the camp fence. Later, her father was filing past a group of Russian prisoners, many of whom had been at the camp a lot longer than he. Her father picked out the Russian he felt was most in need and he gave the rabbit to that Russian.

Years later, my grandfather was walking down the street as the new minister in Indiana, Pennsylvania when a man ran out and hugged him. “Don’t you remember me?” the man said to him. “You saved my life.” It was the Russian he had given the rabbit to.

Our mother was always very trusting. You might even say gullible. She would believe anything you told her.

At one point it occurred to me that this was really some grand strategy on her behalf. She trusted you so much you didn’t want to betray that trust. Her absolute faith in you inspired you to be worthy of that faith.

You cannot talk about my mother without also talking about my father.

My father always felt like he was the luckiest man on earth for having won my mother’s heart. It was like he had won the lottery, the Superbowl and the World Cup all at the same time.

We talk about how she accepted his proposal of marriage at Princeton. What we didn’t talk about was the number of times my father asked her to marry him and she said no.

My father loved this story: He and my mother were sitting in a diner early in their relationship. The waitress came up. “I am sorry to bother you,” she said. “But I have to tell you: Never before have I seen a couple so in love.” My father was very happy to hear this. Then came my mother’s response: “Let’s just say we are very good friends.”

But eventually my mother came around.

Our father wrote a number of poems about our mother. The one we tend to think of most is “Some Integers/Better By Half” which he wrote for her on her 50th birthday. I know that poem has been read at a number of weddings. My Uncle John read it earlier today.

The poem he wrote for her that I like much better is one that is far more obscure. In fact, it was a poem I hadn’t really thought much about until my brother pulled it out to read to my father on his death bed:   It is called “Midnight, midwatch.”

The poem describes waking in the middle of the night — but not tomorrow, midnight, day gone past itself – and he thinks back to days on the bridge of a destroyer keeping watch during WWII.

Emma mentioned that he refers to the “icebox humming.”  You can just hear my mother complaining about this: “Stan!” she said. “Nobody uses that word any more. Besides, an ice box wouldn’t hum.”

My father did say that a poem wasn’t done until my mother had approved of it. But, in this case, he liked “icebox” better than refrigerator. So he stuck with it.

There is a moment of uncertainty: Are you with me when the log turns?

The feeling of separateness:  The hours of your sleep are closed to me.

And now the kicker, and the lines written for our mother, written for us all we gather here today at the First Congregational Church in her memory, with love and affection for all she gave us –for that wife, mother, daughter, sister, aunt, friend, neighbor and cousin; for that vibrant, wonderful, beautiful, smart, optimistic, opinionated, and happy person: Always that image:  water at the keel those midnights went unseen. The premise of our crossing is your breath to keep me up.

My mother was not afraid of death.

Many years ago, she and my father took a group of us to the plot of earth at Wildwood cemetery to show us where they would be buried. It is a beautiful spot on the slope of a hill, just a couple of feet from where the grass meets the woods.   It is also just a couple of feet from the gravesites for Tom and Nonnie Moore. Her children find this very comforting to think about.

My mother brushed aside some leaves. She lay down on her back. She folded her hands over her chest. She closed her eyes.

Yes, she said finally. Your father and I will be very happy here.

From all five of her children, thank you for coming today.