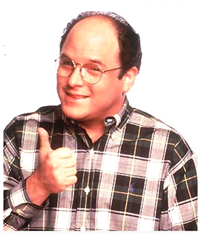 I went into a bank this morning wearing sweat pants, and the guy greeting people at the front door called me “Buddy.” I am sure that, had I been wearing a suit, he would have called me “sir.”

As a younger man, I used to hang out with my cousin and his friends. Let’s just say that if you saw my cousin on the street, you would have assumed he was a homeless man.

Clerks at respectable establishments would cringe the moment we walked through the door. We were much more welcome at other places. Walking into a Seven-Eleven, for example, I felt like George Costanza in the Seinfeld episode in which he is suddenly accepted into an exclusive club – in George’s case, a good-looking people’s establishment. There was, as it turned out, a whole world that had been hidden to me.

Hanging out with my cousin was thus an education for me. As a white male, maybe I was not as attuned as I should have been as to how people might react to me on the basis of my appearance alone.

Or maybe it was like Eddie Murphy getting onto a public bus in white face with only white people already on board.  “Pay?” the bus driver says with surprise.  “Are you kidding me? You know that paying is only for black people, right?”