Tending My Own Garden in Baltimore 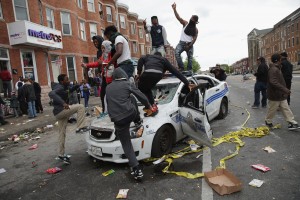 My wife and I live two blocks from North Avenue in Baltimore.  Our house is a short walk from the main events of last night.

The helicopters have been annoying, and they are back now, suggesting that something is going on again today. But, contrary to the way things are being portrayed on T.V., the looting and the violence have been pretty localized; contained to a few areas of the city.

On Saturday, my wife and I marched down Pennsylvania Avenue toward the Inner Harbor with well over 1,000 other citizens from the city. It was a diverse and peaceful group of people.   There were no police. There was no looting or violence.  All those people have gone home.

What you see on T.V. are the actions of a small group of agitators. Preening for the cameras, possibly hoping for a Youtube video that goes viral, these young men do not represent anyone but themselves.

Sometimes, despite the preaching and moralizing on Facebook, there is no lesson. Sometimes things are just the way they are.

3 Comments on “Tending My Own Garden in Baltimore”