Bob Dylan at the Lyric 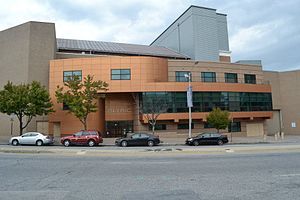 My wife and I have tickets to see Bob Dylan at the Lyric.

This is good news. I like Bob Dylan. And although my wife may not be terribly enthusiastic about his music, she is always happy to go out. Besides, the Lyric is just a couple of blocks from our house. We won’t need to worry about parking.

The (youngish) mother of a juvenile client hears me tell Wayne my investigator about the concert.  “Bob Dylan,” she says.  “Isn’t he the guy who sings the song about knowing when to hold them and knowing when to fold them”?

Dylan wrote so many classic songs.  It is hard for me to choose which ones to mention.  “The Times They Are A Changing.” I tell her.  “All Along the Watchtower.  It’s A Hard Rain That’s Gonna Fall.  Knocking on Heaven’s Door.”

She looks at me.  Then she breaks into the Kenny Rogers song.  Just in case Wayne and I forgot what it sounds like.

The Lyric is a small venue and we have good seats. Still, everything is so dimly lit that we can barely see anything.  This is an older crowd.  Don’t they know older people need more light to see?

I had read that Dylan views his music as very fluid.  You will be very disappointed, the article said, if you expect a song to sound like it did on one of his albums.

Sure enough, he is half way into his fourth song – only one of four songs the entire evening that I recognize – before I realize he is singing “Tangled Up in Blue.”

Heading for another joint/We always did feel the same/We just saw it from a different point of view/Tangled up in blue.

The nasal sneer is there. It is the words I can’t understand.

And he is half way into his first encore – an upbeat, jazzy version of Blowing In the Wind — before I realize that there is no way this spindly little man tottering from microphone to the keyboards and then back again could ever match the legend.

The song is as good as it has ever been.  Maybe better.  And yet the song that influenced a generation of people, a song that helped define an era, can hardly fill this little auditorium.  The world has gotten so much bigger.  There are so many other songs.

We clap and wait for another encore. The lights go up. We make our way to the exit. Thank goodness we don’t need to worry about finding our car.

I Feel The Pain of Everything.  Then I Feel Nothing.

← Teneyck v. U.S.: What is Significant Bodily Injury Under the Felony Assault Statute?
Every Prosecutor Should Experience the Humiliation and Discomfort of an Arrest →