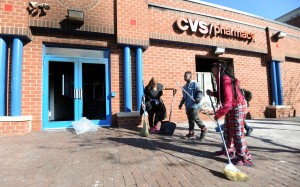 The pizza delivery guy is really upset. He has $250 worth of pizza in the backseat of his car, and his next destination – after leaving our house – is smack dab in the middle of the riots. “I can’t believe my boss,” he tells me. “He is an idiot. He agreed to be paid in cash for this order. There is no way I am ever going to get that money.”

For a moment I can’t help thinking of this poor guy handing out pizzas to a group of young people jumping on police cars at the intersection of North and Pennsylvania Avenues trying to collect his money. I am also reminded of that scene in Bananas in which Woody Allen goes into a restaurant and orders 1,000 sandwiches for his army – with mayonnaise on the side.

And then it occurs to me. I am not the only person with the telephone number of our local pizza place on speed dial. And the other person – my pizza-loving wife – is sitting in a church basement with other community organizers just a block from the epicenter of the unrest. It is she who has ordered the pizza. And, notwithstanding the delivery guy’s concerns, it is she who does in fact pay for it.

In a comment to yesterday’s post, Tyler Suchman sums up the City of Baltimore better than I ever could:   “Baltimore strikes me as a city with strong community leaders and an overwhelming desire to rise above the unrest. Clearly the vast majority of citizens want to protect the city in which so many people have invested their blood, sweats and tears.”

Call me a sap but I have a tendency to look for the positive in every situation. On the morning of September 11, 2001 in D.C., with smoke from the Pentagon rising over the river and reports that other planes were still on their way, I witnessed the greatest traffic jam I have ever seen, caused by all the people trying to get out of the city at the same time before the next disaster struck. At the same time, I had never seen people in D.C. be so nice to each other. It was the opposite of road rage, and it was one of the most affirming things I have ever seen.

Notwithstanding the property damage and injuries, there are similar positives to come out of this experience. It was not only the sight of Muslim and Christian men interposing themselves between the demonstrators and riot police. It was not just the citizens who appeared the next morning with brooms and garbage cans to start cleaning up the debris. It was also that sense of a community – the shared approach of like-minded and responsible people pulling together to dress the city’s wounds.

The burnt out cars are being towed; the streets swept of debris. The banks and the drug stores will open again. If there were a physical manifestation of dignity, it would look a lot like this.

← Tending My Own Garden in Baltimore
After the Unrest: Our Drugstore. Our Hardware Store. →