“Observe and Report”: The Duties of Fake Cops 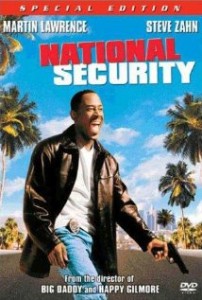 This is what the witness’ duty is.  It is not to “protect and serve” like a regular police officer.  Instead, it is to “observe and report.”

The judge isn’t sure she heard this right, and she asks him to repeat it.  He doesn’t flinch.  He obliges.

I have some fun with this on cross.

You don’t carry handcuffs?  No.

You have no authority to arrest anyone?  No, he answers, but we can detain someone.

You can detain someone?  Yes, if we get permission first.

I see.  And the kids at this apartment complex often make fun of you for not being a real police officer? Yes. I am a security officer, not a police officer.

Martin Lawrence is a wannabe cop in the movie “National Security.”  He and other recruits are handed a whistle and a quarter during training.  You are to call for police, they are told, if anything real actually happens.

This sounds a lot like “observe and report.”  I resist the urge to ask the witness whether or not he has ever seen the movie.

The witness, as it turns out, is not protected under the Assault on a Police Officer statute, and the judge grants my motion for judgment of acquittal on that charge.  I have two witnesses in the hallway who are no longer of any use to me.

I see the prosecutor in the hallway after the trial.  This is the second trial in a week in which we have opposed each other.  We have been polite with one another but formal.   It turns out that he has seen the movie too.  (“I can’t believe you just asked me that.”)  The ice has been broken.  It feels really good to laugh.

← Who Wants To Be The Last Person Arrested for Possessing An Ounce Of Marijuana In DC?
“Equal Justice Under Law”: Why Alec Karakatsanis Is Not Your Typical Smug, Humorless Public Interest Lawyer →

2 Comments on ““Observe and Report”: The Duties of Fake Cops”