The Government Wins Every Time 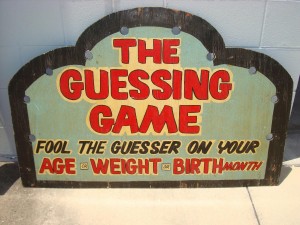 Years ago I went to the Playland amusement park in Rye, New York with some friends. We were walking by the “Guess Your Age or Weight” booth when I noticed that the proprietor had stepped out, temporarily turning the business over to his daughter.

This will be easy, I thought. There is no way this little girl – who looked like she was 11 or 12 years old – would be able to guess either my weight within 5 pounds or my age within 3 years. Sure enough, whichever option I eventually chose, the little girl was not even close. She didn’t seem to try very hard either.

As it turned out, the large animals displayed prominently on the bottom shelf of the booth were purely for show. When the little girl handed me my prize, a puny little stuffed animal from the top shelf that fit within the palm of my hand, I realized how I had been taken:  the proprietor of the game had suckered me into paying $5 for a piece of merchandise that couldn’t have been worth $1.

I thought about this recently after I had two juvenile cases thrown out in one week, both on the morning of trial.  My investigator Wayne and I were congratulating ourselves on the decision to take the cases to trial when I had the same sinking realization I had back at that amusement park.  The fact is, the allegations in both cases were ridiculous. That we were eventually able to get the charges dismissed – with that outcome, for all we knew, completely independent of anything Wayne or I had done — was not nearly as notable as the fact that our clients had been under court supervision for the 4 to 6 months it took to resolve the cases. They were reporting to their probation officers, submitting to drug tests, and verifying their attendance at school throughout this entire time period, all without the government having proven a single allegation.

In other words, just like the proprietors of the “Guess Your Age or Weight” booth in Rye, the government wins every time. Even when it loses.

← Williams v. U.S.: Brandishing Knife in Self-Defense Not Excessive
Pinning Down An Elusive Cop On Cross-Examination →

8 Comments on “The Government Wins Every Time”