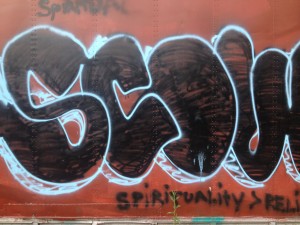 You are sitting in a legally parked car on the side of the road minding your own business when a police car pulls in directly behind you and activates its overhead lights.

How many people would feel that they were perfectly free to drive away at this point?  Anybody?  Anybody at all?

Because this is the standard for determining whether or not a person has been seized for Fourth Amendment purposes.  According to the U.S. Supreme Court in United States v. Mendenhall, a seizure occurs “only if, in view of all the circumstances surrounding the incident, a reasonable person would have believed that he was not free to leave.”  The standard in D.C. is only slightly different.  According to Jackson v. United States, a seizure depends on “whether, taking into account all of the circumstances surrounding the encounter, the police conduct would have communicated to a reasonable person that he was not at liberty to ignore the police presence and go about his business.”

Nobody under the circumstances described above would feel “at liberty to ignore the police presence and go about his business.” Right?  And in fact, people who are familiar with the criminal offenses of failing to stop or fleeing a police officer would be even more reluctant to leave.

And yet, in one of my least favorite cases in D.C., Marcellus Jacobs v. United States, 981 A.2d 579 (D.C. 2009), the D.C. Court of Appeals held that the activation of police lights under these circumstances did not constitute a seizure for Fourth Amendment purposes.

The Court justified this holding by pointing out there “may have been non-coercive and safety-related reasons for turning on the lights that night, not the least of which may have been to signal passing motorists to use caution to avoid striking the officers and appellant at the side of the road.”  The problem with this finding is that it approaches the issue from the standpoint of a police officer deciding to activate the lights, not from the perspective of the reasonable person assessing whether or not he or she is free to leave.

And it only gets worse.

The court’s observation that “there was no evidence . . . that [the defendant] was attempting to drive away or that the lights deterred him from doing so” could appear to shift the burden of proof from the government to the defense.  Finally, the court’s comment that “only a brief time passed before the officers smelled marijuana” could seem to suggest that ascertaining the point of seizure is a malleable concept and that a constitutional violation is acceptable so long as it is a minor violation and not too egregious.  This reminds me of the “three-second” or whatever the rule may be:  Food does not get contaminated if it is only on the floor for a couple of seconds.

The cited language is all drawn from a single paragraph of the court’s decision.  Where is Judge Easterly when you need her and why can’t she author all of the court’s opinions?