The Most Promising Law Students Know Latin and Greek 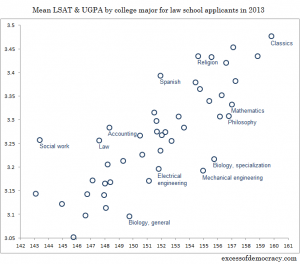 My brother teaches classics at an inner city high school in Connecticut.  Just the other day he called me with a student on the phone.  Interested in a career in the law, the student wanted to know whether she should study business or political science.  I told her that her major did not really matter.  Take the classes you are interested in, I advised.  And then do well in those classes.

That was before I read this blog entry over at Excess of Democracy:  My advice might be different were my brother’s student to call me today.  Publishing a chart that identifies “the median LSAT scores and GPA scores based on self-identified major,” Associate Professor of Law Derek T. Muller presents empirical proof that the best prospective law students are classics majors.

This is music to the ears of a classics poseur like myself.

Always extolling the virtues of a Latin education, it was years before I actually admitted to my children that my own education in classics amounted to a measly two years of Latin in High School.  That was only because my father made me take those two years.  And I was at best a very reluctant and mediocre student.

But that has never stopped me from advising other people on the benefits of an education in classics, including my brother’s students.  For example, I have always thought that my two years of high school Latin did more for my education than any other class I ever took – in high school, college, graduate school or law school.  Not only did it (briefly) impress my children.  It helped with grammar and syntax and vocabulary.  It helped with foreign languages.  It introduced me to Julius Caesar, Pysche, and Roman civilization.  A passing knowledge still comes in helpful in learning many legal concepts.  You have to love a language with the logical structure of German and the simplicity in word choice of a Raymond Carver short story or poem.  And now, as it turns out, by suggesting to potential law schools that you are a promising candidate, taking Latin should also improve your ability to get into law school.