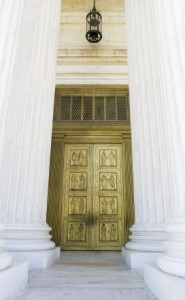 The state of the law with respect to reasonable suspicion, anonymous tips and car stops is already pretty muddy.  Now, with Navarette v. California, 572 U.S. ___ (2014), the Supreme Court has just made it worse.

A woman calls 911 to report another car for running her off the road. The woman provides the time and approximate location of the incident. She also describes the color, make and model of the car along with its license plate number. Police officers pull over Lorenzo and Jose Prado Navarette on the basis of this information. Does this information provide a sufficient basis for a constitutional stop?

The Supreme Court has traditionally been suspicious of anonymous calls. After all, “eliminating accountability . . . is ordinarily the very purpose of anonymity.”  And anonymous calls reporting on innocent facts that are readily observed by anyone add nothing to the equation. As Justice Ginsberg pointed out in Florida v. J.L., 529 U.S. 266 (2000), although an accurate description of a subject’s location and appearance may help police correctly identify the person the tipster means to accuse, it does nothing to establish the tipster’s basis of knowledge or veracity.

In the one case in which the Supreme Court did find sufficient grounds for a legal stop on the basis of an anonymous tip alone, Alabama v. White, 496 U.S. 325 (1990), the caller provided sufficient predictive information about the suspect’s activities.  As a result, the Court could infer that the tipster had a “special familiarity” with the suspect’s affairs. And even this was a close call.

Based on the reasoning of both J.L. and White, the Court should have reached the same conclusion here as in J.L.; namely, that police officers did not have sufficient information to make a legal stop. But once again, the Court — in this case Justice Clarence Thomas writing for the 5-4 majority – decides where it wants to end up and then engages in mental gymnastics to get there, pretending all the while that the resulting decision is consistent with precedent.

First of all, the Court held, that the caller claimed to have witnessed the dangerous driving lent “significant support” to the argument that the tip was reliable:  “A driver’s claim that another vehicle ran her off the road . . . necessarily implies that the informant knows the other car was driven dangerously.”

I’ll give you a moment to reflect on the logic of that.  Now here is Scalia in his dissent:

So what?  The issue is not how she claimed to know, but whether what she claimed to know was true.  The claim to ‘eye witness knowledge’ of being run off the road supports not at all its veracity; nor does the amazing, mystifying prediction (so far short of what existed in White) that the petitioners’ truck would be heading south on Highway 1.

The Court also pointed to the timeframe involved as indicating that the woman made her call near the time of the incident.  As suggested by the “present sense impression” and “startling event” exceptions to the hearsay rule, such contemporaneous reports have “long been treated as especially reliable.”

Not so, says Scalia, even assuming either hearsay exception would apply in this case:

There is no such immediacy here.  The declarant had time to observe the license number of the offending vehicle, 8D94925 (a difficult task if she was forced off the road and the vehicle was speeding away), to bring her car to a halt, to copy down the observed license number (presumably), and (if she was using her own cell phone) to dial a call to the police from the stopped car.

In other words, argues Scalia, there was plenty of time to “dissemble or embellish.”

The veracity of the call was also underscored, the Court held, by the caller’s use of the 911 emergency system.  After all, a “911 call has some features that allow for identifying and tracing callers, and thus provide some safeguards against making false reports with immunity.”

Scalia disagrees:  “It is the tipster’s belief in anonymity, not its reality, that will control his behavior.”  In other words, this is only relevant assuming that the caller was aware how easily her call could be traced back to her.

Finally, what was most puzzling to this DUI lawyer was the Court’s insertion into the analysis of the proposition that, based on the reckless driving of the accused, the police were justified in concluding that the offending driver must have been intoxicated.

It is entirely unclear where this comes from. The Court cites the National Highway Traffic Safety Administration manual on drunk driving and its conclusion that reckless driving can be a consequence of alcohol consumption.  And yet in the manual itself and in every DUI case I have ever seen, there is always some evidence that raises the possibility of intoxication.  For example, it might be that police officers smelled alcohol or that the suspect swayed and appeared intoxicated or that alcohol containers were found in the car.  It is never based on the driving behavior alone.  After all, as we all know, there are some pretty lousy drivers out there who are completely sober.

And in this case, the caller made absolutely no mention of alcohol or intoxication.  Writes Scalia:

I fail to see how reasonable suspicion of a discrete instance of irregular or hazardous driving generates a reasonable suspicion of ongoing intoxicated driving.   What proportion of the hundreds of thousands – perhaps millions – of careless, reckless, or intentional traffic violations committed each day is attributable to drunken drivers?  I say 0.1 percent.  I have no basis for that except my own guesswork.  But unless the Court has some basis in reality to believe that the proportion is many orders of magnitude above that – say 1 in 10 or at least 1 in 20 – it has no grounds for its unsupported assertion that the tipster’s report in this case gave rise to a reasonable suspicion of drunken driving.

Finally, writes Scalia, not only was there NOT collaboration of the reckless driving reported by the caller, there was ample evidence to dispute it.  After all, police followed the car for a good 5 minutes before pulling it over only to find that Lorenzo Navarette’s “driving was irreproachable.”

It was difficult enough to figure these things out under J.L. and White.  Now things have gotten much worse.  As Scalia points out,

The Court’s opinion serves up a freedom-destroying cocktail consisting of two parts parent falsity:  (1) that anonymous 911 reports of traffic violations are reliable so long as they correctly identify a car and its location, and (2) that a single instance of careless or reckless driving necessarily supports a reasonable suspicion of drunkenness.  All the malevolent 911 caller need do is assert a traffic violationm and the targeted car will be stopped, forcibly if necessary, by the police.  If the driver turns out not to be drunk (which will almost always be the case), the caller need fear no consequences, even if 911 knows his identity.  After all, he never alleged drunkenness, but merely called in a traffic violation – and on that point his word is as good as his victim’s.

A Public Defender, “When everyone is a criminal, you don’t need the Fourth Amendment”