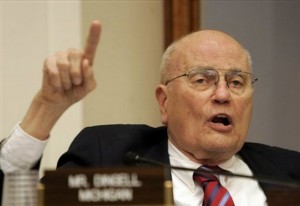 It has always been my definition of government waste.

As chairman of the House Energy and Commerce committee, Congressman John Dingell was an extremely powerful man who inspired fear in the hearts of everyone who worked at the U.S. Environmental Protection Agency. One of my duties as a special assistant in the Office of Air and Radiation during the late 1980s was to coordinate responses to the hundreds of letters his office sent us every year. Not so affectionately labeled “Dingell-grams,” these multi-page, error-ridden, and stream-of-consciousness letters contained 30 to 50 different questions, each of which demanded a detailed and fully-vetted response.

Repeating each question in the body of the letter so that I could then provide the Agency’s response, I would normally clean up the grammar and spelling from the original. One day, perhaps feeling particularly overburdened by one of the many Dingell-grams, I left the grammatical and spelling errors in the questions while inserting “sic” after every mistake. I fully expected the Assistant Administrator to return the letter to me. He signed it instead. It was a small victory for the little guy.

Then there were the endless congressional hearings. Although I had worked on Capitol Hill before joining the executive branch, I was still dismayed to see my decent and accomplished bosses brow-beaten by self-important, ego-driven members of Congress. And, of course, Congressman Dingell was the worst. I attended one hearing at which he spent over an hour pontificating before a captive audience about some issue that had absolutely nothing to do with EPA. I couldn’t help thinking that his showboating had far more to do with the man’s ego than with getting anything accomplished. Welcome to the real world, young man.

In 1989, a member of the Congressman’s office accompanied us to an international negotiation in Bulgaria under the auspices of the U.N. Economic Commission for Europe. Having just responded to a Dingell-gram accusing EPA of some type of waste, I wondered what this staffer was going to contribute to our delegation. To his credit, he did not leave the meetings to go sight-seeing with his girlfriend, as most Congressional aides did when traveling abroad, but stayed with us for the entire week of meetings.

One night, over beers at a Sofia restaurant, I found out that this aide, a “repo man” before joining Congressman Dingell’s staff on the committee, was the author of most of the Dingell-grams we received. Although I resisted the temptation to seek his reaction to the “sic” letter, he did let me know that nobody ever read our carefully coordinated and crafted responses anyway. The point of the letters, he told me, was to force us to confront these issues internally. As for the reams of material we sent him (“you must have piles and piles of paper in your office”), management of these materials was not a problem: We simply throw them out, he told me. After all, he said, if we ever need them again, we know exactly where we need to go to find them.

Reporting on Dingell’s recent announcement that he will be leaving Congress after this term, The Washington Post notes that Dingell has just surpassed the late Robert Byrd (D-W.Va) as the longest-serving member of Congress ever. This is too long. Even all these years later, I am still happy to see him go.