No Reading From Prepared Remarks 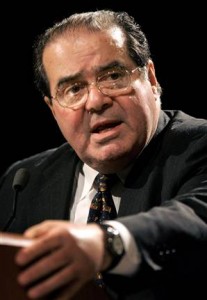 This from the Blog of Legal Times:

By all accounts, it was an excruciating moment at the Supreme Court on Tuesday.  A nervous first-time advocate began his argument by reading from a prepared statement, until the never-shy Justice Antonin Scalia interrupted and asked: “Counsel, you are not reading this, are you?” The lawyer, Steven Lechner, froze and did not answer, staying silent until Justice Stephen Breyer broke the tension with these words: “It’s all right.”

. . . As news of Scalia’s remark spread, commentators lined up on both sides. Supreme Court blogger, law prof and author Josh Blackman called it “a dick move,” adding that “just because [Scalia] wears a robe does not entitle him to be a jerk, and embarrass the lawyer for something like this.”

My view on this simple: You should never be reading anything. This is true if you are appearing in traffic court or doing a mock trial in law school. It is also true if you have the honor of standing before the highest court in our country.