The Walter Mitty of EPA 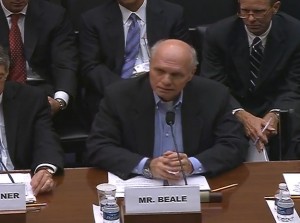 Former EPA employee John Beale told colleagues that he worked for the CIA, traveling to far-flung places like Pakistan.  In an email to his then supervisor, the current Administrator Gina McCarthy, he referred obliquely to his work for “this other agency” (perhaps she had seen something in the news?) and promised that he was still accessible by email.  But, he noted with a “ho, ho, ho,” she should allow for a nine-hour time difference.

He also told people he caught malaria while serving during the Vietnam War.  Flare-ups kept him out of the office for weeks at a time.  He would occasionally call in to attend an important meeting by conference call.  People admired him for his ability to work even while suffering from this affliction.

Beale was quiet and low-key, listening far more than he spoke.  When he did speak, he picked his words carefully.  You always had the impression he was about to say something of great significance.

And – you saw this coming, didn’t you? — none of the business about the CIA or Vietnam was true.  None of it.  He didn’t even have a security clearance.  While he was supposed to be on top-secret missions around the world, he was either at his vacation home in Cape Code, visiting his elderly parents in California, or bicycling or reading a book at his home in Arlington.

Subsequent investigation revealed that Beale had billed the government $14,000 for first-class air-fare to London, and then stayed four nights at a hotel at over $1,000 a night.  He lied on his resume, saying he had previously worked for a U.S. senator.  He produced a note from a chiropractor to receive a handicapped parking space at a cost of $18,000 to the government.  And he took off one day a week initially and then weeks at a time while supposedly doing covert work for “this other agency.”  In the end, and what finally did him in, he continued to receive his full-salary (inflated because of an illegal retention-bonus) for a year and a half after he and his colleague Rob Brenner were feted on a Potomac River retirement cruise by Gina McCarthy and other high-ranking EPA officials.

Rob Brenner was a Princeton-educated policy analyst who became head of the Air Policy Office and ultimately Deputy Assistant Administrator for Air.  Smart and well-spoken, Brenner was extremely well-respected throughout the Agency, leading its efforts during the reauthorization of the Clean Air Act in 1990.

Brenner seemed to serve as the “environmental conscience” of the Air Office.  Given free reign to dabble in whatever he deemed important, Brenner was always coming in and out of meetings, his presence felt even when he was sitting quietly on the periphery.  You could count on him for a thoughtful and unyielding argument in favor of the best environmental outcome.

And this, I suspect, proved to be his ethical undoing.  When given the opportunity by a lobbyist with business before EPA to buy a Mercedes at $8,000 less than the ticket price, he must have thought that there was no way anyone could ever question his integrity.  Of course his judgment would not be clouded by a sense of debt owed to the lobbyist who incidentally was also a friend.

I worked with both Beale and Brenner during the 1980’s and 1990’s.  I also worked with Beale’s wife.  So it is strange to see them again after so many years sitting side-by-side at the witness table last week in front of the House Oversight and Government Reform Committee.

Brenner speaks before Beale.  Noting that he is appearing before the committee voluntarily, Brenner delivers an opening statement in which he simultaneously compliments and castigates Beale. Beale made a major contribution to U.S. environmental protection efforts over the past 20 to 30 years.  His later actions are inexplicable.

Brenner’s self-serving defense of Beale only serves to anger members of the committee, and Brenner seems to be caught off-guard when the questions turn on him.  I am here to discuss John Beale, he tells the committee.  I am not prepared to discuss anything else.

You are here voluntarily, Committee Chairman Darrell Issa (R-Cal.) says to him, only because you were told that we would subpoena you otherwise.  The two of you were long-time friends, co-owning a house in Cape Cod.  Then you used your role as a supervisor to hire him at EPA.  You approved his retention bonus.  Did you ever verify his claims of other employment offers? And most importantly, did you accept a reduction of $8,000 in the price of a Mercedes from a lobbyist with business before the EPA?

This is collateral damage.  None of this would have become public but for Brenner’s friendship with Beale and his role in bringing Beale to the agency.

And Brenner does not do himself any favors.   For one thing, he can’t seem to figure out that he needs to turn on his microphone before speaking.  I would have thought you’d have that figured out by now, one of the committee members tells him.  More importantly, he cannot seem to give a straight answer.

When asked about the Mercedes, Brenner claims to have been cleared of any wrong-doing.  He is contradicted by the representative from the Inspector General:  There is a big difference between being cleared and having the Department of Justice decide not to prosecute.   Brenner then retired before we could pursue matters further.

Congresswoman Jackie Speiers (D-Cal.) is on-point and direct.  It is she who puts it to Brenner in the simplest terms:  Mr. Brenner, she says to him.  Do you think you did anything wrong?

Beale has already been through most of the criminal prosecution at the time he appears at the hearing, awaiting only sentencing.  His eyes look vacant and resigned.  He has lost his house, his reputation, and probably his marriage.  He has already re-paid the government $800,000 with another $500,000 re-payment due soon.  And, at 64 years old, he faces over 3 years in a federal penitentiary. The destruction of this man is almost complete.

It is not our business, Congressman Issa says, to subject people to ridicule.  And yet Beale’s transgressions are laid out in excruciating detail by each member of the committee while he sits grim-faced at the witness table.   One committee member – apparently no fan of due process – demands to know why Beale and Brenner were not fired the moment their transgressions became apparent:  What does it take to fire someone in government, he asks.

In the end, committee members arrive at the exact wrong conclusion:  a knee-jerk reaction calling for new rules to make sure this never happens again.  Because that is what many members of Congress – Democrats and Republicans alike – seem to know how to do best.

There are bad apples in every bunch, including Congress.  We do not need systematic reform to cover every conceivable act of malfeasance.  What we do need is people enforcing the rules that are already in place with consequences for failing to do so.

There are reasons you are not allowed to hire your cronies in government.  Supervisors after Brenner also failed to ask the necessary questions, probably assuming that, since their predecessors had gone along with it, everything must have been in order.

In fairness to Gina McCarthy, she was apparently the only supervisor to ever question Beale’s claims.  And it was she who eventually brought the malfeasance to light, reporting him first to the Office of the General Counsel and ultimately to the Inspector General.  At the same time, you have to question her decision to participate in the retirement river cruise in honor of Beale and Brenner after such disturbing questions had already been raised about both men.

Beale declines to make an opening statement.  This leads to a detailed discussion about whether or not he can invoke his Fifth Amendment privilege against self-incrimination.  Although he has already pled guilty, he has not yet been sentenced.

The chairman ultimately excuses Beale from the hearing, instructing him to retire to an anteroom where he can watch the hearing on closed circuit TV.  The committee then takes a quick break so that the seating at the witness table can be re-arranged.

If Beale’s wife is in the room, she is not captured on camera.  Beale rises from his chair and, shaking the stiffness out of his legs, turns to the people in the front row.  Nobody rises or speaks to him.   He is like a politician with no one to wave or smile at.  He follows committee staff past the front of the table and then toward a back entrance.  His walk is slow and dignified.   He hesitates when he gets to the door.  Then he disappears.

← Loss
Taking The Fall For A Client →