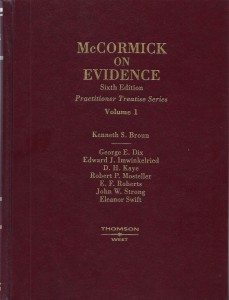 According to Federal Rule of Evidence 401, the test for relevance is whether the evidence has a “tendency to make the existence of any fact that is of consequence to the determination of the action more probable or less probable than it would be without the evidence.”

In other words, says McCormick, there are two components to relevant evidence:  materiality and probative value.

“Probative value” is the “tendency of evidence to establish the proposition that it is offered to prove.” Does learning of this evidence make it more or less likely that the disputed fact is true?

Like poetry, there is a lot of meaning packed into just a few words in the Federal Rules of Evidence.