They Make Me Wear This Jersey 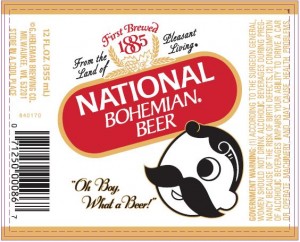 Without children at home to figure out all-things-electronic for us, Susan and I can’t get our television to work.  So we walk over to a Sports Bar on Charles Street to watch the Redskins game.  I have not missed a single play since RG-III joined the team.  Susan is not a big football fan but she likes to keep me company.

Four large-screen and multiple smaller TVs are all showing the Ravens game.  We sit at a table near the bar and crane our neck to watch a single small screen tuned to the Redskins.  There is a guy in burgundy-and-gold who watches with us.  I buy him a round.  Then he buys us one. He also high-fives me every once in a while.  He makes so much noise when the Redskins finally score that some of the Ravens fans come over to see the replay.

We drink the local brew, National Bohemian.  At $2 a pint, it is great deal, and I like the taste.  The waiter comes over in a Ray Lewis jersey and whispers that he too is a Redskins fan.  They make me wear this jersey, he says.

Susan does not keep up on her football.  She met the quarterback in Philadelphia once, surely one of the most recognizable men in town.  I understand you play football, she said to him.  What position do you play?  She also turns out to be kind of a fair-weather fan. Occasionally I catch her checking out the Ravens game.

The Ravens win, and the bartender cranks Purple Rain by Prince.  I complain to Susan about the noise level.  Really?  Do they need to play it that loud?  It is at that moment I realize we are the only people in the bar who are over thirty.

Purple Rain, Susan says to me.  Get it?  Our friend looks at me too.  He has practically joined us at our table.  He also narrows the hint:  Purple, he says.

I think about it for a while.  Still nothing.  Susan tries again:  Purple.  You know, for the Ravens?  Our friend looks disgusted.  I have lost his respect. He doesn’t high-five me.  He doesn’t buy me another round.  The Redskins lose, and when we look around we realize that he has already gone.

We like your city.  We wish you were still here.

3 Comments on “They Make Me Wear This Jersey”