Living Next Door to the “House of Cards” 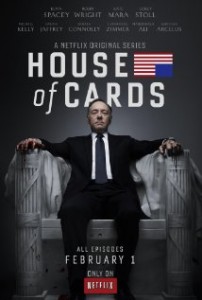 Our “House of Cards” neighbor gave me a tour of the house.  I felt honored to get inside, considering that we now have carloads of young people who pull up to photograph themselves outside on the front step.  At first I didn’t realize what was going on, and when I agreed to photograph a group of the young people all together, the woman had to keep telling me to make sure I included the house number in the photograph.

They have been shooting recently for the second season.  Although my wife and I were out of town, our contractors huddled by an upstairs window to watch the shoot below.  They showed us a jumpy video of what they swore was the top of Kevin Spacey’s head, sitting with Jodie Foster on our front steps during a break in the filming.

The “location” people complained to me about the plantings my wife and son did right before my son left for school.  I came outside one morning to find a group of people huddled outside our house, fretting over the little garden plot in front.  This reminded me of a friend of ours from Philadelphia who was cited for planting Cosmos in her front yard.  But those aren’t weeds, she complained at city hall upon contesting the ticket.  They are flowers.  She brought along some photographs from a magazine to prove it.

But the location people turned out to be very pleasant, and very accommodating, and we left the keys for them on another occasion so that they could turn on and off lights in our front windows.  There was a generous check sitting in our foyer when we got home.

I am upset they haven’t decided to use our house instead.  After our house in Philadelphia got onto some location person’s list, we had a number of commercials shot there.  It was a very profitable arrangement, and not too burdensome. We would go to bed at night while they were still shooting downstairs.  When we woke up the next morning, every single thing – every rug, every piece of furniture, every knick-knack, every scrap of paper – was put back exactly where it had been. They also fixed things they hadn’t broken.

One Comment on “Living Next Door to the “House of Cards””