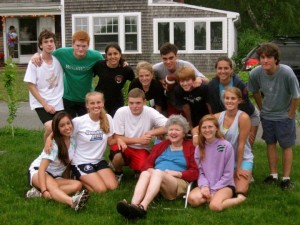 We have been coming to Cape Cod with my extended family now for 25 years.  We came first as couples. Then we came with children. With the 13 cousins growing up and the rest of us just getting old, it is unclear how many more years we will cross the Sagamore Bridge to make this trip.  Like a game of “Kick the Can” or “Capture the Flag,” games for younger kids we may have played a year or two too long, you don’t want to push your luck.

Collectively, my siblings and I have raised some impressive children. With two of the kids graduated from college and now working in Boston, we have contributed students to Tufts, Dartmouth, Penn, Michigan, Connecticut College, Middlebury, MCLA, and Columbia. We have had All-American and All-Ivy soccer players, writers, musicians, and artists. Our children are grounded young people with empathy and awareness of the world around them — if also a certain clubbiness when dealing with each other.

If there was once three groups of cousins, an older group and then two younger groups divided by gender, it is a single group now, thirteen exuberant young people with an ease in communication born of love, kinship, and common experience. They will be in each other’s college applications and weddings and in each other’s lives long after my generation is gone. We laid the seed and it has taken root.

My brother has always been the organizer, the person getting us all together for a card game, talent show or poetry reading.  If “Kick The Can” and “Capture the Flag” were big in the early years, we have moved onto other games during the day:  touch football, tennis, volleyball, baseball, and soccer.  Having recently found a basketball court nearby, we have also played a lot of basketball the last couple of years, with enough players for a full court game and substitutes on both sides.

Whatever pride we may feel, there has also been a certain sadness in recent years, a recognition of something in transition. My brother and I, for example, may not be the leading scorers we used to be.  Although it was a big deal when the two oldest boys beat us in doubles tennis a couple of summers ago, no one seemed to notice when two of the youngest boys beat us this year.  Before we know it, the only remarkable thing will be that my brother and I still play at all.  “You don’t know what it is like to get old,” my mother has said.

“These hours undo me,” is what my father once wrote, and I think of the blue beach umbrella pitched low against the sun and our children, younger then, building a sand castle at the water’s edge, moving farther from us with every passing moment to follow the receding waves. I think of the cousins today as poised on the brink of something, like seagulls crouching in that moment before flight, their movements silent and quick and as yet undetermined.

The tide will change. When the sun begins to dip beneath the dunes, marsh grass throwing shadows on the cooling sand, we will pack up our things and leave the sand castles to stand or fall as they may against the rising water. Acceptance is what it has come to for my mother. I am still caught between the tides.

← In Re W.R.: Warrantless Search During a Custodial Arrest
In Re S.W.: Context is Critical When Proving Criminal Threat →

12 Comments on “From Tide to Tide in Cape Cod”