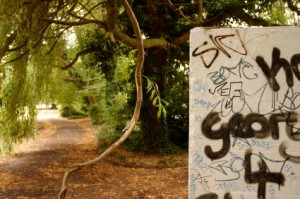 The common law distinction between “general intent” and “specific intent” offenses doesn’t work.  This is what the D.C. Court of Appeals emphasized once again in Adam Ortberg v. United States, 81 A.3d 303 (2013), a recent case dealing with the required mental state for unlawful entry.

The defendant in Ortberg was charged with unlawful entry after he walked past a registration desk to enter a fundraising event at the W Hotel.  When approached by a waiter at the hotel, who noticed that Ortberg was not a wearing a badge, Ortberg said that he had a badge “somewhere” but would have to look for it.  Ortberg then held up a sign, which he pulled out from his jacket, and “yelled an educational message about his cause.”  He continued his verbal protest as he was escorted from the building.

According to D.C. Code § 22-3302(a)(1), it is illegal for a person to enter or to attempt to enter any private dwelling or building, or any part of such property, “without lawful authority” and “against the will of the lawful occupant or of the person lawfully in charge thereof.” Although the statutory language does not include a “mental state,” the court assumed that “where a criminal statute is silent on the question of mens rea, it is ordinarily subject to a presumption requiring a culpable mental state unless it is clear the legislature intended to create a strict liability offense.”  Moreover, although unlawful entry has frequently been described as a “general intent” offense, the court noted that “categorizations of general and specific intent can be too vague or misleading to be dispositive or even helpful.”

It was at this point that the court engaged in a detailed discussion of the mental state that the government must prove in order to secure a conviction for unlawful entry.  Specifically, pointing to the model D.C. jury instruction, the court noted, first, that the defendant must enter or attempt to enter the property “voluntarily, on purpose, and not by mistake or accident.”  Second, the government must prove that the defendant knew or should have known that he or she was entering against the will of a person lawfully in charge of the premises.

Breaking these two requirements down, it is clear that entering the premises “voluntarily” means, for example, that the person was not involuntarily dragged onto the premises.   “On purpose, and not by mistake or accident” requires the government to prove that the defendant was not entering the premises based on a misperception, for example, on his entitlement to enter.  Likewise, the requirement that the defendant knew or should have known that he was not entitled to enter the premises required the government to prove in this case that Mr. Ortberg did not have a reasonable bona fide belief in his right to enter.  In this case, the latter requirement allows for an affirmative defense of sorts:  the “bona fide belief is generally discussed as a defense that the government must disprove beyond a reasonable doubt if it is fairly raised by the evidence.”

Although the decision in Ortberg did not propose a solution to problems with the general intent/specific intent dichotomy, Judge Ruiz has suggested elsewhere that a transition to the mental states suggested by Model Penal Code – e.g., intentionally, purposefully, knowingly or recklessly – could serve as a good step in the right direction.

← It Is 8 Degrees Fahrenheit
No Reading From Prepared Remarks →