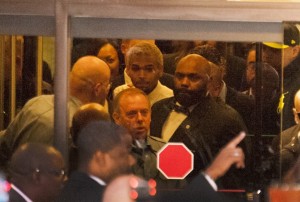 In a city in which you can hail a motorcade, the sight of a famous politician will barely draw a second look.  But people go crazy whenever they come into contact with a movie star or famous musician.

It was therefore not surprising that Chris Brown’s appearance at D.C. Superior Court earlier this week turned a bunch of seasoned professionals into eager fans.  There was speculation about who would represent him.  A U.S. Marshall was grilled about Brown’s conditions in custody (did Brown and his bodyguard get a separate cell?).  There was a line of amateur photographers by the board outside C-10 with Brown’s name on it.  And Gigi, the grande dame of arraignment court, came into the CJA office to announce to the assembled masses that Brown’s arraignment number was 71.  I don’t think I have ever seen Gigi smile before.

The Washington Post then announced today that Brown has voluntarily checked himself into anger management:  “Looks like someone has finally persuaded Chris Brown to do something about his volatile life style,” the Reliable Source reported.  As for speculation that Brown “might have been sobered by his unexpected stay in a D.C. holding cell,” it is much more likely that the idea came from his lawyer Mark Geragos.  With Brown facing up to four years in prison for violating his probation from his 2009 conviction in L.A., it is usually a good idea to get ahead of the curve.

← Why The Truth Doesn’t Matter At Trial
Aspiring to Be A Good Lawyer (and Person): Keith Lee’s “The Marble and the Sculptor” →