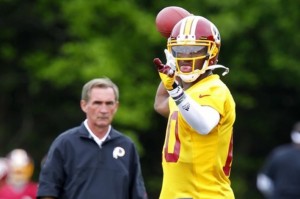 Tony Dungy has suggested the possibility of benching Robert Griffin III in favor of his promising but still unproven backup, Kirk Cousins.  If this had been someone from D.C. making this suggestion, I would have bemoaned the tendency of area sportswriters to overreact.  A win means that the team is bound for the Superbowl.  And a loss results in all sorts of second-guessing and handwringing.

The truth is that the team has been awful so far, not just on offense but on defense as well.  Although RG-III’s numbers have been pretty good (his quarterback rating for the Packers game was over 100), these statistics are misleading:  All of RG-III’s touchdown passes and most of his completions have come after the team was down by over 20 points.  Defenses pull back at that point.  It is a bend-but-don’t break strategy.  They give up short yardage to run out the clock.

The problem is that the team is no longer taking advantage of RGIII’s strengths.

Players and sportswriters have trumpeted the fact that the team has virtually the same group of players that won all those games in a row last season to win the NFC East.  This is not a good thing.  Teams need to make changes very year, no matter how talented the personnel.  You can always improve.  Things cannot remain static.  The reason they are relying on the same group of players is because:  (1) they gave up  their number one draft pick this year to acquire RG-III and (2) the team had no salary cap room to bring in free agents because of the NFL penalty for gaming the system a couple years back. Forgive me if I don’t join in the celebration.

Last year RG-III made his offensive line look like a bunch of pro-bowlers.  This was almost the exact group we had the previous year that had so heavily criticized.  It is largely the same group we have this year.  The fact is that last year’s offense – the read option — took advantage of RGIII’s speed and ability to run to keep defenses guessing.  If they committed to tackling the running back, RG-III kept the ball.

This year’s team runs many of the same plays.  The problem is that, without using RG-III’s legs to keep defenses honest, nobody expects him to run.  The defense can thus collapse on Morris without being punished.  And, as for traditional drop back pass plays, the offensive line is revealed for what it really is:  mediocre.  With the interior line collapsing on him and defensive linemen all over him, RG-III has had no time to pass.  He is suddenly mortal.

RG-III’s father said a lot during the off-season about how his son needed to pass, not run.  You cannot blame a father for looking out for his son.  Nor can you blame RG-III for largely agreeing with his father:  He is a dutiful and loyal son.  I have no idea how much this has influenced the Shanahans.  But the choice as I see it is this:  If the Shanahans want to win now, they are going to have to unshackle RG-III, no matter the risk.  And if they decide instead to preserve their extremely talented franchise quarterback for the future, they are going to have to bide their time for a couple of seasons until they can give RG-III the front line and the talent around him he will need to succeed.

Note:  I have written this blog entry without once using the team’s name.  I did this to show that you can love the team without loving its name.