McNabb Blows It With Public Advice to RGIII 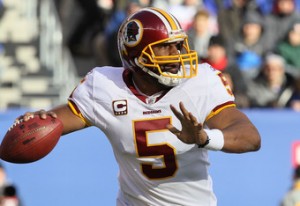 I have always admired Donovan McNabb.  I was present at the 2002 game in Philadelphia in which he threw for three touchdown passes after he broke his leg.  I sided with him in the controversy with Terrell Owens.  And I cheered when the Redskins brought him to D.C. for his ill-fated one-year stint in 2010.

But I have to say that, as reported by Mike Wise of the Washington Post, McNabb blew it by going public with his advice to Robert Griffin III.

McNabb says he tried to reach out to Griffin last season but never heard back:  “I don’t blame him,” McNabb says.  “Someone on his end was supposed to link us up, and it never happened.  No big deal.  But I would like to sit down with him.  I’d actually like me and my dad to sit down with RG and his dad.”

If given the opportunity, McNabb says he would advise Griffin to tone it down:  “[I]f you’re coming off ACL surgery, you don’t need to be having a press conference at OTAs.  Every week?  Really?  It becomes a circus, a sideshow.  It takes away from the focus of what these sessions are supposed to be about:  the team.”

McNabb also criticized Griffin’s father for going public with his calls for the Redskins to throw more next season.  “His dad should have never done a one-on-one interview like that,” McNabb says.  “You can’t say what he said because it almost undermines his son, who has to answer all the questions about it later.  Now, we all know what he said was right.  But that’s something you voice behind closed doors because otherwise it creates a wedge that didn’t have to be there.  No team needs those kind of things hovering over them.”

I am thinking that RGIII and McNabb are not going to be getting together any time soon. McNabb should have followed his own advice on keeping things behind closed doors. The best advice is quiet advice. If McNabb has something to say to RGIII, he should say it to him privately.