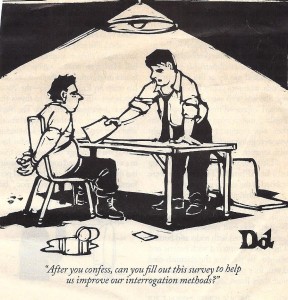 Although you might think that invoking your right to remain silent and invoking your right to a lawyer would have the same legal effect, you would be mistaken.  In fact, if ever forced to choose, you should always ask for a lawyer. Police can resume interrogation after a period of time when you invoke your right to remain silent. But if you say you want to speak to a lawyer, they need to wait until your lawyer gets there before they can start asking questions again. David Sonenshein, my criminal procedure professor in law school, had a good explanation for this anomaly:  It’s because lawyers make the rules, he said.

In James Dorsey v. United States, 60 A.3d 1171 (D.C. 2013), the defendant was taken into custody under suspicion of having robbed an elderly woman. The D.C. Court of Appeals opinion devotes over 6,000 words to the grueling process police used to wrench a confession out of him:  The defendant was in custody for over 13 hours before he confessed. He was handcuffed to a chair for most of this time and interrogated on and off by a tag-team of four different detectives. He was lied to, threatened, and cajoled.  Suffering from the effects of alcohol withdrawal and denied repeated requests to sleep, he peed in his pants.

At some point during the interrogation, he invoked both his right to remain silent and his right to the assistance of counsel. And, of course, in response to what Chief Judge Glickman described as “badgering with a vengeance,” Dorsey eventually capitulated. After being given a couple of hours to finally sleep, he called out from his cell and said he wanted to confess. It was this “significant break in the questioning” that the trial judge concluded insulated the confession from the earlier police action.  The confession was the product not of police “coercion” or subterfuge” but of genuine “feelings of remorse.”

A 5-2 panel of the D.C. Court of Appeals disagreed:

If the suspect requests counsel, the interrogation must cease until an attorney is present.

Furthermore, even absent the suspect’s invocation of these Fifth Amendment rights, his statement during a custodial interrogation is inadmissible at trial unless the prosecution can establish that the accused in fact knowingly and voluntarily waived [his] rights when making the statement.  For a waiver to be valid, it must be voluntary in the sense that it was the product of a free and deliberate choice rather than intimidation, coercion or deception, and made with a full awareness of both the nature of the right being abandoned and the consequences of the decision to abandon it . . .

As to the knowledge component of a valid waiver, the suspect must have been aware that his right to remain silent would not dissipate after a certain amount of time and that police would have to honor his right to be silent and his right to counsel during the whole course of interrogation.  (Internal quotations and citations omitted.)

Turning from this discussion of Miranda v. Arizona, the Court then addressed Edwards v. Arizona:

Although the Supreme Court has been receptive to the adoption of bright-line rules to implement Edwards, we believe that a per se rule barring the government from ever showing a valid initiation following improper police questioning of a suspect in custody after a request for counsel would be overly broad, and we do not discern that it is required to effectuate Edwards.  But the violation of Edwards does engender a cause-and-effect presumption that the government has the burden of overcoming if it is to reap the benefits when the suspect reopened the dialogue with police.  To show that the reopening constituted a valid initiation within the meaning of Edwards, the government must show that it was not reasonably attributable to the post-invocation questioning.  This [preponderance of the evidence] standard permits suspects the freedom to act on genuinely unbadgered impulses to talk with the police notwithstanding the violation of Edwards.   (Internal citations omitted.)

In reversing Dorsey’s conviction and remanding the case for re-trial, the Court concluded that it “is not enough that Dorsey was aware of his rights in the abstract and knew enough to try to assert them; every time he actually did assert his rights, his assertions were overridden and his rights were denied.”  After all, a “right that is not honored when invoked is no right at all.”