Obama Will Not Disappoint Us on Monday 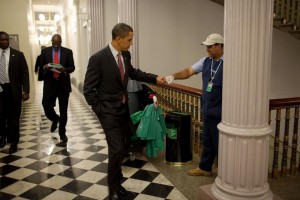 Four years ago on Monday, at 11:50 am, I was standing in a courtroom in Philadelphia – I think it was in front of Judge Kosinski, always one of my favorite judges there – when the judge unexpectedly broke for recess. Be back at 1:00 pm, he instructed the courtroom.

I rushed down to the 4th floor of the building. There, crammed into the conference room of the public defender’s satellite office at the Criminal Justice Center, I watched Barack Obama’s swearing-in ceremony on a small black-and-white television with bad reception. There were four or five of us in the room, and although people were normally pretty discreet when it came to politics at the PD’s office, the sense of excitement was palpable.

With all the preparations underway for Obama’s second inauguration on Monday, I was thinking back to this while driving into the District yesterday morning. According to the Associated Press, 600,000 to 800,000 people are expected to show up on the Mall on Monday. This is down from the 1.8 million who attended four years ago.

Although people have bemoaned the lack of excitement associated with this inauguration, it is only natural that the second term of an administration is going to generate less interest. Many people – even ardent supporters – have been disappointed by the lack of progress on their pet issues over the past four years. You can only take on so much at once, and reality trumps principle every time. And, because we already know what we will be dealing with, there is not that awed sense of endless possibility as we project our hopes onto the newly elected leader.

I myself find the lack of interest oddly re-assuring:  It is a positive sign for this country that the presidential inauguration of an African-American man with “Hussein” for a middle name has now become ho-hum news.  Sometimes a lack of newsworthiness is a good thing.

Obama will not disappoint us. Although Franklin D. Roosevelt and John F. Kennedy are recognized as among the best presidential speechmakers over the last 100 years, and their words were often inspirational, there was also something sophomoric – a certain hokiness – about some of their rhetorical techniques.  The use of parallel phrasing in “There is a nothing to fear but fear itself” and “Ask not what you country can do for you…” is a cute technique.  But it also makes the speeches appear somewhat dated.  People just don’t make speeches like that anymore.

A certain plain-spokenness did much to enhance George W. Bush’s speeches. The address he gave to the nation to justify the invasion of Iraq was, I think, a masterpiece. I remember being spell-bound. For his part, Obama seems able to combine the plain-spokenness of a George W. Bush with the inspiration and cadence of a John F. Kennedy or Martin Luther King, Jr.  And he does it without the gimmicks. Or the lies.

By the accounts I have seen, Obama does not have a Ted Sorensen or a Peggy Noonan.  He does not turn over his speechwriting to a committee.  Instead, he relies on the smartest man in the room – himself.  And that man also turns out to be a pretty good speechwriter.

As for where I will be during this second inauguration, I am sure I will be too busy to watch Obama’s address. Unlike four years ago, I certainly won’t hurry out of court to watch it. But this is a good thing. It is comforting to know that I can watch his speech later on the Internet with the knowledge that whatever he says, it will be the right thing.  It is also re-assuring to think that, now that we have passed the milestone of electing an African-American as president, the emphasis this time will be where it should be:  We will focus not on who Obama is but on where he plans to take us.

15 Comments on “Obama Will Not Disappoint Us on Monday”