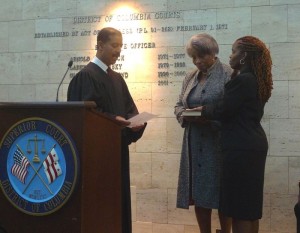 Judge Kimberley Knowles was sworn in as a D.C. Superior Court Associate Judge on Friday.  Confirmed by the Senate on August 2, Judge Knowles had previously served as a magistrate judge, sitting most recently in Room 116 where she presided over drinking-and-driving cases.

According to Zoe Tillman of the Blog of Legal Times, Superior Court Chief Judge Lee Satterfield, D.C. Court of Appeals Chief Judge Eric Washington, and Holland & Knight partner Bill Gould all spoke at the ceremony.  Satterfield announced that Knowles will be serving in Family Court:  “A lot of good things will happen to the young people in her courtroom.”

Judge Washington, for whom Knowles clerked right out of law school, noted that Knowles was always “infinitely prepared for every situation.”  Bill Gould (also my brother-in-law) echoed Judge Washington’s theme of preparedness when describing Judge Knowles. Citing her “almost pathological preparedness,” Gould said that “there will be no judge in any courtroom that will be more prepared and confident and comfortable” in making decisions that will have such an important impact on people’s lives.

← “Passing the Lipari”: A Poem for Veteran’s Day
Three Years In: Dealing With Potential Clients on the Internet →

One Comment on “Kimberley Knowles Sworn in as D.C. Superior Court Judge”