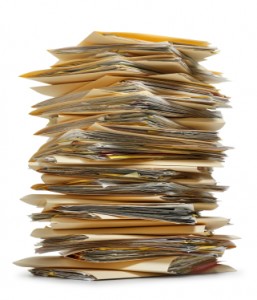 The prosecutor can hardly blame me for being skeptical.  I ask her about one of the counts that was dropped from the complaint, and she tells me it was because the complaining witness said a few things to her that didn’t add up.

“That’s Brady, then,” I tell her.  I feel a little badly because she is young and I know she was just trying to be friendly, candid, with me.

She thinks about this for a moment.  Then she tries again:  “It was a privileged statement made in the context of the attorney-client relationship.”

“Still Brady,” I respond.  “The complaining witness is not your client.”

Another pause.  “I’ll talk to my supervisor.”

A couple of days later she emails me. I have asked her to intervene on behalf of a client bringing a civil protection order, and she begins by bringing me up to speed on that.  She is doing me a favor on this other thing.  Then, casually, as if it just occurred to her:  “On the Brady matter you raised, I wanted to let you know that I dropped the counts because I didn’t think they made out criminal offenses.  There was nothing exculpatory that led to my decision not to pursue those charges.

Brady v. Maryland, 373 U.S. 83 (1963), is a rule of fairness and minimum prosecutorial obligation, not a discovery rule. It requires the production of information, not specific documents. It covers any information that tends to case doubt on the defendant’s guilt with respect to any essential element of any charged count; any physical evidence, testing or reports tending to make guilt less likely. It encompasses problems with making an ID and any information that tends to support an affirmative defense or that tends to case doubt on the admissibility of the government’s evidence.  Inconsistent statements by government witnesses are covered.  So is any information that relates to the potential health or physical impairment of any witness. The government must disclose any information relating to potential witness bias, including benefits received by a witness in exchange for his cooperation with the government.  It must also disclose any information related to a witness’ dishonesty or criminality and any instances of misconduct or abuse of authority by a police officer.

And that’s just for starters.

I can forgive ignorance, although, given the stakes, it is unconscionable for a prosecutor not to be completely versed in Brady.  What I can’t respect is a complete lack of ethics.  First it was said but not covered by Brady.  Then, as it turns out, it was covered by Brady but not said at all.

← Ramifications of a Juvenile Adjudication in D.C.
Barber Shops and Caesar Salads →