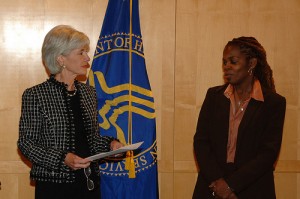 D.C. Magistrate Judge Kimberley Knowles has been nominated by President Obama to serve as a D.C. Superior Court associate judge.  Assuming the nomination is confirmed by the U.S. Senate, Judge Knowles will fill the seat left by retiring Judge  Zinora Mitchell-Rankin.

Judge Knowles received her Bachelor’s degree from Cornell in 1991 and her law degree from Howard University in 1996.  She served as a judicial law clerk to Judge Eric Washington after graduating from law school, and then worked as an Assistant U.S. Attorney until she became a magistrate judge in 2010.  At the U.S. Attorney’s Office, she served as deputy chief of the Sex Offense and Domestic Violence section.

According to the Blog of Legal Times, this was Knowles’ first time applying for a Superior Court judgeship.  Observers do not anticipate any problems with her confirmation.

← “Jejomar Untalan Was On The Brief For Appellant”
More Shcooling Needed →