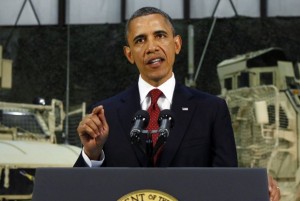 If you have ever read this blog before, you know I am a big fan of President Obama. I mean, really big fan.

I have defended him against accusations that he is trying to use the first-anniversary of Osama Bin Ladin’s killing for political purposes. As for Mitt Romney’s claim that even President Carter would have ordered the raid, my response is:  Yes, but Carter would have halved the number of helicopters and Navy seals involved so as to not send the wrong signal.  And then the mission would have failed when the first helicopter experienced problems.

I mean, come on, you have got to give Obama some credit.

But I cannot defend the statement Obama made yesterday promising U.S. troops that “[h]ere, in the pre-dawn darkness of Afghanistan, we can see the light of a new day on the horizon.”

For one thing, it is a remarkably trite turn-of-phrase for a President who is probably the best orator we have had since John F. Kennedy. Having long admired the President’s speechmaking ability, I understand that he is unusually hands-on when it comes to the drafting process. I understand also that the Obama speechwriters has managed to avoid the bureaucratic bickering and paralysis that has plagued every other speechwriting team since 1963.  (In What I Saw at the Revolution, Peggy Noonan described how the White House “mice” tried to change her quotation used in Reagan’s Challenger speech – “broke the surly bonds of Earth to touch the face of God” — to “they reached out and touched somebody.”)

So, whose great idea was this line?

For another thing, it is entirely unclear what President Obama meant by “new day.”

If he is assuring troops that they will soon be out of that miserable, backward-looking country and out of harm’s way, then, yes, for those troops, let’s hope it is a new day.

If he is promising that we have made enormous strides in combating Al-Qaeda, then yes, from all reports, it looks like we have in fact seriously weakened that terrorist organization. Time will tell.

But if he is promising that anything will be different in Afghanistan after we have pulled out our troops, then he is coming dangerously close to George W. Bush’s famous claim of “Mission Accomplished” after returning from Iraq.  And with the same backdrop of American troops behind him too. In this case, the statement was not only premature, with the potential to raise false expectations and the sour smell of politics all over it, it was also irresponsible and dangerous.

Let’s hope it was just the jet-lag.

← [Title TBD]
The ABCs of “Character Evidence” in a D.C. Criminal Case →