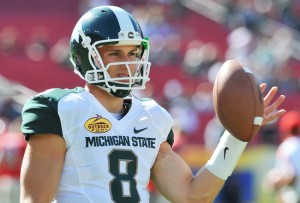 The Washington Redskins have selected yet another quarterback in this year’s draft. After trading three first-round picks and a second-rounder to obtain Robert Griffin III (RGIII), they selected Michigan State quarterback Kirk Cousins yesterday in the fourth round.

Given the Redskins’ needs at so many other positions, Thomas Boswell of the Washington Post has characterized this decision as “moronic.” Others have warned about the dangers of kicking off yet another quarterback controversy in D.C. that could distract and demoralize the team.

I don’t agree with either Boswell’s characterization or the concerns raised by others. RGIII is an extremely talented and self-confident young man who will only thrive under the pressure of having another talented quarterback in training camp. With concerns that RGIII might, like Michael Vick, end up sitting out much of the season with injuries, it will be good to have a talented backup quarterback for insurance. If nothing else, the Redskins will be able to develop Cousins as trade-bait for next season, similar to the way the Green Bay Packers benefitted from league interest in their backup quarterback Matt Flynn.

At the same time, I cannot help but see parallels to the last time the Redskins drafted two quarterbacks in the same draft. The year was 1994. The much-heralded quarterback taken with the third overall pick was Heath Shuler, and the lesser-known quarterback taken in a later round – the guy who eventually won the starting job and who ended up going to two pro bowls —  was Gus Frerotte.

It is not that I expect RGIII to flameout the way Heath Shuler did. The NFL’s new system for setting rookie salaries should prevent the type of holdout that sabotaged Shuler’s career. And, as Boswell points out, the Redskins have invested far too much in RGIII to allow him to fail. RGIII will be with the team for many years, and if the team continues to lose during this time, it will be the other players and the coaches who will be shown the door. Nor am I expecting Cousins to beat him out in training camp or during the regular season.

But injuries do happen, particularly with a quarterback like RGIII who can run, and it is very possible that Cousins might find himself behind center at some point during the season.

It has often been said that the most popular player in town is always the backup quarterback; it is easy for us fans to invest so much hope in the great “if onlys” of the unproven and unknown. This has also been true in D.C. I think in particular of Babe Laufenberg, the fan favorite who played for three seasons with the Redskins in the 1990’s without ever taking a snap but who, when finally given an opportunity with the Chargers and then the Cowboys, failed miserably.

Other quarterbacks who found themselves spending some time on the bench in D.C. would have been popular had they not acted like such prima donnas. Here I think in particular of Jeff George and Jay Schroeder, both of whom acted like petulant children when they were refused the starting job.

So, if you don’t want to be like Babe Laufenberg, Jeff George or Jay Schroeder, you do want to be like Gus Frerotte, the guy who, perhaps along with Brad Johnson, has always been my favorite Redskins QB.

Frerotte’s underdog story could have the stuff of a good movie. Selected in the 7th round in 1994, he toiled away in obscurity while Shuler received all the press attention. While Shuler’s family packed away his college jerseys for the day Shuler would be inducted into pro football’s Hall of Fame, Frerotte spent the preseason working out and honing his skills. And while Shuler held out for what eventually became a then-record $19.25 million contract, Frerotte reported to training camp on time and ready to get to work, despite the fact that he was paid only a small fraction of the money Shuler received.

D.C. fans can be pretty fickle.  It is unfortunate, for example, that for all the good work Frerotte did for this city, he is probably best remembered as the guy who gave himself a concussion by banging his head against a concrete wall to celebrate a touchdown. Sitting in the bleachers at RFK, I was also disconcerted to hear the fans boo him when he later returned to D.C. for a playoff against the Redskins as starting quarterback for the Detroit Lions. If anything, I thought we should have been wishing him well and cheering him for the many years he spent in D.C.

But, while Shuler criticized Redskin fans as having nothing on the fans from his college team (and this while he was still the presumptive quarterback for the future), Frerotte always endured the inevitable criticism with patience, grace and maturity. That’s the proper approach for any member of the team. It is particularly important for the backup quarterback.

With all the attention and love now directed toward RGIII, this will not be an easy time to come to D.C. as the back-up quarterback. But Cousins can learn from Gus Frerotte:  If he puts aside his ego, works hard, develops his skills and his conditioning, and learns the plays and the system, he can be assured that his time will eventually come.

The Redskins Should Pass on Robert Griffin III