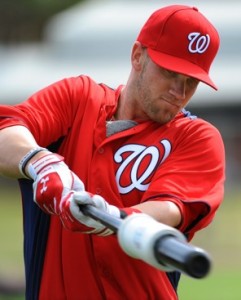 Bryce Harper, star outfielder for the Washington Nationals, has suspended his Twitter account.  No longer will the rest of us be privy to his comings and goings (“Morning Twitter!  On my way to the field!  Hope you all have a great day!  God bless!”) or deepest thoughts and dreams (“Country music always heels wounds!” “Love college hoops!”)

I am no longer surprised when an actor I admire – someone who has portrayed a deeply nuanced character on T.V. or in the movies – turns out personally to be fairly banal. Why should it be any different with a 19-year-old whose only claim to fame is that he can hit a 90-mile-per-hour fastball?

Otherworldliness has always been part of the allure of celebrity. It is the notion that these people live so much more interesting lives than the rest of us. By granting us greater accessibility to these celebrities, Twitter and other social media help dispel this notion. As Harper, Ashton Kutcher and others have proven, movie stars, professional athletes and rock stars turn out to be no more interesting than that annoying guy who lives next door.

Although celebrities will always garner more Twitter followers than the rest of us, Twitter should also have at least some equalizing effect.  Stephen Hawkins and Jean Dominique Bauby have demonstrated the power of disembodied voices to stimulate our thought and interest.  In the ideal world, wit, humor and insight on Twitter should count for just as much as corporeal talent or celebrity.

“I’m over it,” Harper said to the Washington Post about Twitter.  “I’m bored.”  Now he knows how the rest of us feel.

← When It Comes to Robert Griffin III, the Redskins Should Pass
Grace. Class. Loyalty to the Client. →