An Adult Among Children: Obama’s Apology to Karzai 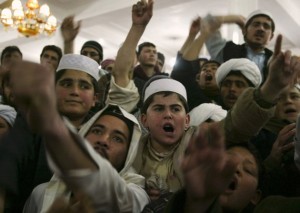 My favorite non-apology of all time came from American Express. After eight months of pressing zero and waiting for a “customer representative” to come on the line, somebody at the company finally admitted they had made an error.

I suggested a small credit to our account as a token of their contrition. The woman laughed. Then she realized I wasn’t kidding:  I’m sorry, sir, but I can’t do that. So we settled on a letter of apology. Imagine my dismay when the non-apology came in the mail:  We are sorry, American Express told me, if you felt you were inconvenienced by this misunderstanding.

I was thinking about this in connection with President Obama’s recent apology to Afghan President Karzai after charred copies of the Koran were found in a garbage pit at a U.S. air base. Newt Gingrich has called the apology an “outrage,” noting that on the day it was announced two American soldiers were killed by members of the Afghan military during rioting over the incident. It is Karzai who owes us an apology, Gingrich said. Joining him in the condemnation of the apology was Gingrich’s peer when it comes to schoolyard tit-for-tat, Sarah Palin. You can almost hear the nyah-nyah-nyah-nyahs.

Newt Gingrich has it all wrong. We are in deep trouble the moment we use the actions of a troubled, third-rate nation as the standard for our behavior. If you make a mistake, you apologize for it. It is one thing for presidents to apologize for things that happened during another administration:  President Reagan for the internment of Japanese Americans during World War II, President Clinton for slavery and the Tuskogee syphilis study. It is something altogether different for President Obama to apologize for something that happened on his watch.

President Obama has shown himself to be a man of both principle and pragmatism. He is concerned about the safety of American soldiers still in Afghanistan. And he is committed to repairing U.S. relations with the Islamic world.  That he had the courage to issue the apology – and open himself up to condemnation during an election year – speaks volumes. Newt Gingrich should take notes.

← Unauthorized Use of a Motor Vehicle: Applying the Notion of a “Grace Period”
On Starting a Law Blog: 10 Handy-Dandy Tips from a B-List Criminal Defense Blogger →

2 Comments on “An Adult Among Children: Obama’s Apology to Karzai”