Empathizing with the Accuser at a Civil Protection Order Hearing 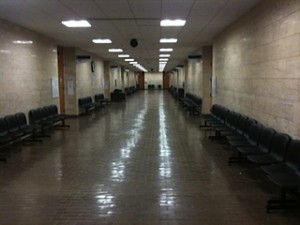 “Oh,” says the witness to the judge.  “There is one other thing I would like to say.”

The witness is the father of the respondent in a civil protection order hearing.  He is an old man and he is angry.  The judge has given him tremendous latitude in testifying about every complaint he has ever had against my client, the petitioner in this case, a woman who has asked for an extension of a protective order she took out last year against her former boyfriend.

I understand that the rules of evidence are a little bit more relaxed in this type of hearing.  I also understand the judge giving an unrepresented party a little extra latitude.  But this has been ridiculous.

The respondent has just finished his “cross examination” of his father, although there weren’t many questions, mostly ramblings, and the father is getting up from the witness stand when a last thought occurs to him. There is one other completely irrelevant piece of poison he would like to share with the court.

The judge grimaces when I stand up yet again to object:  “There is no question on the floor,” I say.

“Overruled,” the judge says.  She looks back at the old man.  “What else would you like to tell the court, sir?”

Although I refuse to look at him, I can hear the respondent chuckle at the table next to me.  He is convinced he has won this case.

I am not worried, and it occurs to me later that the judge had already made up her mind to grant our motion by the time she started to overrule my objections.  She decided to give the respondent the opportunity to make his case before she ruled against him. That way he could never claim he hadn’t been heard.

But I am concerned about having my client further humiliated with completely irrelevant – but embarrassing – details of their relationship.  After all, her family and friends are sitting in the gallery behind us.

“Thank you, your honor,” the old man says.  “I wanted to let you know that, before this hearing, the petitioner’s lawyer threatened us in the hallway.”

I do my best to remain expressionless.  The judge too is unfazed.  “He threatened you?”

“Yes,” the man says.  “Outside in the hallway, before this hearing started, the lawyer told my son he would face criminal charges if we didn’t agree to extend the civil protection order.”

The judge takes a moment to consider this.  “Well,” she says finally.  “With arraignment on criminal charges now set for next month, I would say that was a pretty fair assessment of your son’s situation.”

Afterward, standing outside in the hallway, my client looks drained but relieved.  These things are always more difficult than expected.  “Never mind,” says my client’s father.  “She is a big girl who makes her own decisions.  We got the outcome we wanted.  And I am not concerned about anything I heard today.” My client smiles weakly.

The father is being charitable.  Even with the adrenaline leaving my body, I find I am still angry. I am annoyed with the court for letting in all sorts of hurtful but irrelevant evidence.  The respondent had been trying to embarrass – to punish – my client for filing the motion to extend the protective order.  The court became complicit the moment it began overruling my objections.  I am also concerned about the vague threat the respondent made at the end of the hearing.

I remember once again why, apart from an occasional civil protection order, I don’t do civil work.  There is too much ado about too little.  I realize also that I am not used to sitting on that side of the courtroom – representing the accuser – and the experience has given me a tad bit more empathy for the poor, unsuspecting civilian witnesses who face a defense lawyer’s wrath.