My client is a convicted felon. He knows that it is illegal for him to possess a firearm. He lends his ex-wife his car.  She returns it to him after a couple of days but accidentally leaves behind a handgun she had intended to take to the pawn ship. She calls my client and tells him the firearm is in the car. Not wanting to call the police and not wanting to drive around with a firearm in his car, my client takes the firearm into his house for safekeeping until he can return it to her.  It is the next morning that the police execute a search warrant at his home in connection with other charges and confiscate the weapon. 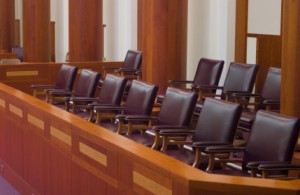 The government will have no difficulty proving my client’s previous convictions.  The government also has my client’s testimony under oath at an earlier trial that he found the firearm and took it into his home.  As a result, the only issue at trial is going to be whether or not this possession was “knowing and intentional.”

In Pennsylvania, if I recall correctly, you don’t have to go far to find a definition of “knowing and intentional.”  Both terms are defined at the very beginning of the Pennsylvania Crimes Code.  Not so in Virginia.  Although this language is included in a number of statutes criminalizing certain behavior, nowhere in the statute are the terms “knowingly” and “intentionally” actually defined.

There is also no jury instruction.  The Committee on the Model Jury Instructions in Virginia may well have concluded, as did its counterpart in D.C., that defining many traditional legal terms, such as “general intent,” “specific intent” and “malice” could be more confusing to juries than helpful.  But, as I later argue to the judge at trial, a jury will want to know the definition of key terms of the offense with which the defendant has been charged.

I make a conscious decision not to force the issue before trial. The prosecutor has hundreds of other open cases he is thinking about.  I, on the other hand, have had six months to focus on this issue.  From the prosecutor’s response to my pre-trial motion to dismiss, I have also noticed that he seems to be kind of light on the law; I don’t want to give him time to prepare.  Finally, there is no guarantee in Prince William County that the judge who sits for the pre-trial motions will also preside at trial. I could succeed in bringing one judge around to my way of thinking only to have another judge sit at trial, all the while giving the prosecutor plenty of time to arm himself.

Instead, I plan to educate the judge on my legal theory during my “motion to strike” (Virginia’s version of a motion for judgment of acquittal) and then address the issue head on during our arguments on jury instructions.  But I am worried about the prosecutor objecting during my opening statement.  I craft my opening statement carefully so as to emphasize the plain language used in the statute without any hint of interpretation.

As it turns out, I am the one who objects during opening statements. Although it has seemed blatantly obvious to me what the issues will be at trial, the prosecutor has apparently not been able to anticipate our defense by the time trial begins. Perhaps distracted by some of the pre-trial motions I did make, he begins to tell the jury in his opening statement what the defendant’s argument is going to be.  I object.  The jury is excused and we debate.

The prosecutor is angry.  Why would I go to all the trouble of securing the admissibility of certain evidence during pre-trial motions if I never had any intention of introducing that evidence?  Why would I waste the court’s time like that?  I tell the judge that it is the defendant’s prerogative to change his mind.

The judge sustains my objection and brings the jury back in.  He tells them that the government has made a mistake in trying to anticipate evidence the defendant is not planning to introduce.  They are to disregard this statement.

The prosecutor proceeds with his case.  He calls eight witnesses to testify to things I have already conceded in my opening statement.  Detectives, police officers, and crime scene technicians all testify to the recovery of the firearm in a bureau of my client’s house along with his driver’s license, Visa card, and bank checks.  I ask only two questions on cross.  Otherwise I rise in my seat and say “no questions” every time the prosecutor concludes his direct.  Later my client gets on the stand and testifies:  yes, that was my home, my bedroom, my bureau, my driver’s license, my Visa card, and those were my checks.  And, yes, I put that firearm in the bureau.

When the jury is excused for lunch and we get to the jury instructions, the prosecutor argues that the use of “intentionally” in the statute requires only that the government prove “general intent”; that is, that the defendant acted “voluntarily and on purpose, not by mistake or accident.”  This means that, in order to meet its burden with respect to this element of the offense, the government will only need to prove that the defendant intended to pick up the firearm.

In fairness, the government’s interpretation is supported by a jury instruction on “actual and constructive” possession of a firearm. This instruction defines “knowingly and intentionally” as being “aware of the presence and of the firearm and [having] actual or physical possession or constructive possession.”  It is, as far as I can tell, the only definition of “knowing and intentional” anywhere in the jury instructions.  At the same time, this jury instruction – in addition to being circular and confusing – is completely unsupported by the case law it cites and, for whatever reason, the prosecutor does not include it in his list of proposed instructions.

I argue that, because the legislature does not modify “possession” in other sections of the firearms statute with these terms, thereby requiring only physical possession with respect to those provisions, it must have been thinking along the lines of “specific intent” when it used “knowingly and intentionally” in connection with possession of a firearm by a felon.  This means that the defendant must have actually intended the required result; that he must have wanted to possess the firearm.

Although there is no jury instruction on this, my argument is supported by case law.  In Young v. Commonwealth, 659 S.E. 2d 308, 310 (2008), for example, the Virginia Supreme Court held that actual or constructive possession was not sufficient to prove knowing and intentional possession in the context of controlled substances. The Court must therefore have had something more in mind than simple physical possession.  This argument is also supported by the statute’s legislative history, the Model Penal Code and Wayne LaFave’s authoritative treatise on criminal law.

The judge is not persuaded by the jury instruction I have cobbled together based on these authorities, even after taking a moment to read the case law.  The simple fact, he tells me, is that there is no instruction on the definition of the terms.  At the same time, in the interests of balance, he does agree to strike an instruction proposed by the government. This is the standard instruction that informs the jury it may infer that a person intends the natural consequences of his/her actions.

After listening to our arguments, the judge eventually decides not to deliver any instructions to the jury at all on the meaning of these terms.  But he allows us to argue our respective interpretations during closing.

Not surprisingly, when the closing arguments are completed and jurors retire to the jury room to deliberate, they come back after 20 minutes with two questions:  What is the definition of “intent”?  And what is the definition of “possession”?  After some more argument, the judge again refuses to instruct them one way or the other; they are to use common sense and their own experience in figuring this out for themselves.

I am convinced that it was their confusion over this issue – whether or not to believe the prosecutor’s version or my version – that led to the completely illogical compromise verdict they eventually arrived at.  Without any guidance from the court and not knowing what to do, they decided to split the difference:  The defendant was guilty but not that guilty.  A formal jury instruction on a key terms used in the statute could have avoided this confusion altogether.

My client can always appeal.  Virginia law is pretty clear on the importance of jury instructions. We had also litigated what I thought was a very strong motion to dismiss earlier in the process. Specifically, we had argued that the staggering of successive prosecutions against my client in order to gain tactical advantage had violated his constitutional protection against double jeopardy and his right to due process.

At the same time, acquitted of the more serious charge and now sitting at home with his family, it is unclear whether my client will choose to exercise this option. In fact, I suspect the judge may have had all of this in mind when he reduced the jury’s sentence to time-served. Pacifying a defendant through a more lenient sentence can sometimes prevent your decisions from coming back later on appeal.