On Petty Thefts and Grievances: Why My Faith In Humanity Has Been Destroyed 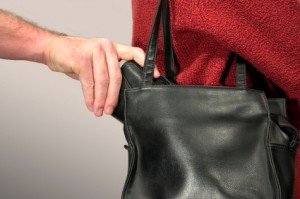 Reason #1:  It’s Thursday, and we are expecting a big rainstorm.  I remember to bring my umbrella – a very distinctive umbrella with blue and white stripes – and I leave it in plain view in the lawyer’s lounge of D.C. Superior Court.  After all, the only people allowed into the lounge are my colleagues, other defense lawyers.  Having finished up court for the day, I look outside and see that it is pouring.  Thank goodness I remembered the umbrella.  Except that when I go downstairs, I find that someone else apparently forgot to bring his/her umbrella and has taken mine.  What kind of person – a lawyer no less – would do something like that?  Two days later I am still crabby about that.

Reason #2:  My client has entered into a deferred prosecution agreement.  These agreements are generally a good thing for first-time offenders charged with minor offenses. The person performs an agreed upon set of conditions and avoids any new arrests for six, nine or twelve months.  In return, the government agrees to dismiss the charges upon the successful completion of these conditions.  In other words, the person charged with the offense avoids the risk of trial, and comes out of the whole unfortunate experience without a conviction on his/her record.

My client’s agreement includes the condition that she pay $400 in restitution to the complaining witness, someone I will call Ms. X.  The incident which led to my client’s arrest apparently resulted in Ms. X losing her car keys.

Coincidentally, at the time we entered into the agreement, I had just had to replace my own keys for a very similar car, and was surprised at the $150 price tag.  Four hundred dollars to do the same thing sounded like an even more unreasonable amount of money.  The prosecutor – someone I trust — assured me that my client would not have to pay anything until Ms. X produced the receipt, and we entered into the agreement.

That was nine months ago.  Two days before the final court listing, and after much prompting by the prosecutor, Ms. X finally produces a receipt.  It is for $271.

I draw three conclusions.  First, Ms. X needs to drive a different car or find herself a new car dealership.  Second, the prosecutor should bring criminal charges against Ms. X for attempted theft.  My client could serve as the complaining witness. Third, the lawyer who took my umbrella could serve as Ms. X’s counsel.  They apparently have much in common.