Holding David Petraeus Accountable: Why the CIA is Like an SEO Marketer

I would be “keenly aware that I am the leader of an intelligence agency, and not a policymaker.” 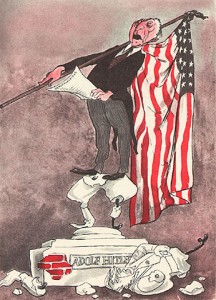 I am not a big fan of the CIA.

The first part of my beef is purely personal.  In the 1980’s, while a graduate student at Georgetown University, I was offered a summer position at the CIA Headquarters in Langley.  Two weeks before my first day of work there, the Agency sent me a letter stating that they would “no longer be processing my application for summer employment.”

To this day, I have no idea why the offer was withdrawn.  At the time, I assumed that something bad had come up during my background investigation.  A friend of mine, for example, admitted that he told the investigator about the communist propaganda posters I brought back from one of my trips to Eastern Europe and hung in my dorm room at college.  (Lest you question my patriotism, I should add that I hung these posters as a novelty. You have to admit that the depiction of Konrad Adenauer standing on a pedestal with Adolf Hitler’s name on it and an American flag draped over his back is laughable.)

Or maybe I had failed either the lie detector test or the excruciating round of psychological tests I had been required to perform.

My opinion on the cause of my termination changed somewhat after I had worked for the federal government for a few years.  Having suffered through the budget process many times, I concluded instead that I was probably the victim of a simple budget cut.  In other words, it was a bureaucratic mess-up, not a diabolical plot to deny me employment.

Whatever the cause, the late notice made it impossible for me to obtain another professional job for the summer, and, as my friends bragged about their exciting summer positions on Capitol Hill or at a think tank, I found myself mopping floors as a janitor at the Meridian House International off of 16th Street.

The second part of my beef comes from my experience working not for but with the CIA.  I have never had the good fortune to sit in on one of the high-level meetings David Petraeus talked about at his recent appearance before the Senate Select Committee on Intelligence.  So I have no idea how the CIA operates at this level.  But I did have limited dealings with the CIA at a much lower level during my tenure with the federal government.

Back in the 1990s, for example, I participated in a U.S. government fact-finding trip in Asia.  As part of the preparations for the trip, we received a CIA briefing.  There were three things wrong with the briefing we received.  First and foremost, the briefing was given by the CIA, a government agency that required me to work as a janitor one summer when all my friends had exciting jobs they could brag about. 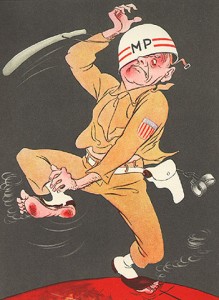 Second, the briefing was given in multiple stages depending on the level of security.  I had a security clearance that allowed me to attend all but the very last session.  Of the classified information I was privy to, I can tell you that every piece of information offered was drawn directly from the local press reports I and others had been reading in preparation for our trip. In other words, someone was obviously sitting at a desk somewhere in Virginia reading the very same press reports we were reading, producing it as “intelligence”  (a dubious value-added to begin with), and then classifying it.

There is far too much public information that is classified in an odd and misguided attempt to protect national security.  It is then impossible for U.S. policy-makers – the people who need to know this stuff — to separate the real stuff from the noise.  This is akin to the problems of reliability associated with information gained through the use of torture.  People will admit to anything if you push them far enough.  Increasing the level of torture can only increase the degree of inaccuracy.

My final beef with the briefing – a problem I can only assume manifests itself at higher levels – was that the focus of our meeting that day was not on what the intelligence said but on what we should do with that information.  Our briefers were woefully short on concrete information that could benefit us and long on what the long-term policy implications of that information should be.  There was no Joe Friday with “just the facts, ma’am.”

I have no idea how many terrorist attacks or other threats to our security have been averted because of work done by the CIA.  I also appreciate how difficult it can be to anticipate events going on all over the world, including things that are going on within governments that are completely closed to outside scrutiny.  In 1964, for example, when CIA Director Allen Dulles was criticized for having failed to predict the downfall of Soviet Premier Nikita Khrushchev, you can hardly blame him for his testy response:  Khrushchev himself didn’t know he was about to the ousted.  How the hell were we supposed to foresee it?  In addition, I can only laugh when I hear conspiracy theorists claim that we had all the intelligence we needed prior to September 11 to avert those attacks.  Obtaining the intelligence is one thing; interpreting and acting on it is another.

At the same time, like the use of an SEO marketer to increase business for your law firm, you have to wonder what terrible things are being done in your name.  And the notion of the CIA as a policy-making entity scares me.  As we learned from the weapons of mass destruction in Saddam’s Iraq, it is too tempting to find the information that backs up your policy objectives.

That’s why I was intrigued to read Petraeus’ statement above – reported in today’s Washington Post – that he would view his role as the head of an intelligence agency and not as a policymaker.  I have never heard a CIA Director say this before.  Given how difficult it is navigate oneself through the bureaucratic nightmare of Washington, D.C., to say nothing of the allure of playing a major role in the Roosevelt room meetings, we’ll see how long he is able to stick to this promise.

← In Re Gault: “Constitutional Domestication” of the Juvenile Justice System
Brian Tannebaum: On the Ethics of On-Line Marketing →