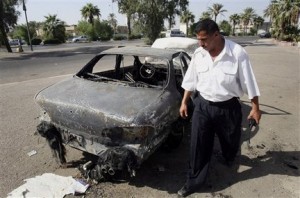 My two sons and I are big fans of the Xbox 360.  While my boys have branched out into all sorts of different games, I myself am a passable Halo Reach and Madden 11 player, at least for an old guy.  But one game that will not be finding itself under our Christmas tree this December is a new game put out by 505 Games called “Blackwater.”

The game will require players to “assume a lead role in a Blackwater operation to protect a fictitional North African town, battling dangerous warlords and fighting back two opposing militia forces.”  A blogger who has sampled the game claims that “at no point was I required to fire at any innocent civilians, or commit any other atrocities.”

ABC News has quoted my wife’s response to the new game:  “Innocent people have been killed by this company.  Imagine yourself as a mother or father of someone who has been killed, and now it’s a videogame?”  And:  “It’s terribly offensive . . . It’s staggering that anyone would use [that] name for a game.”

Congresswoman Jan Schakowsky (D-Il) agrees:  It is “counter-productive to glorify a company like that.”