On Libya and the So-Called “Obama Doctrine”

Ever since the Monroe Doctrine of 1823, in which President James Monroe announced Latin America as a special sphere of influence for the United States, people have tried to encapsulate a President’s entire foreign policy approach within the narrow confines of a single doctrine.  Harry Truman, Richard Nixon, Jimmy Carter, Ronald Reagan, Bill Clinton, and George W. Bush have all had doctrines associated with their presidencies, with each doctrine changing according to the predilections of the pundit applying the label. 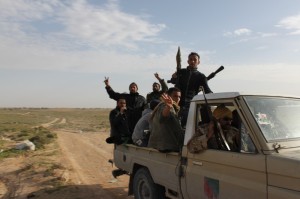 Now, courtesy of the Wall Street Journal, comes the so-called “Obama Doctrine.”  The Doctrine is drawn from a statement made by National Security Council spokesman Ben Rhodes to describe the Obama Administration’s response to Moammar Gadhafi’s war against his own people:  “This is the Obama conception of the U.S. role in the world – to work through multilateral organizations and bilateral relations to make sure that the steps we are taking are amplified.”

Writes the Journal:  “Whatever else one might say about President Obama’s Libya policy, it has succeeded brilliantly in achieving its oft-stated goal of not leading the world.  No one can any longer doubt the U.S. determination not to act before the Italians do, or until the Saudis approve, or without a U.N. resolution.  This White House is forthright for followership.”

Richard Cohen of the Washington Post simplifies this even further:  The Obama Doctrine, he says, should be called the doctrine of “You First.”

Putting aside the difficulties of describing an Administration’s entire foreign policy through a simple catch-phrase, it is hard to argue with an approach that seems to be working. While Barack Obama had very little foreign policy experience prior to his election, he demonstrated during the campaign that he has the right instincts when it comes to dealing with hostile governments. Then and now, while proving himself willing to take unilateral action when necessary, he has also shown a remarkable appreciation for both the limits of American persuasiveness and power and the benefits of concerted international action.

The international response to the Libyan uprising – though not unprecedented – is pretty impressive; and it has been accomplished in part because of, not despite, the Obama Administration. The French and British have taken the lead within the U.N. Security Council, which made it easier for Russia and China to come on board.  This in itself is an amazing feat. More importantly, the Arab League came out early in support of the “no-fly” zone.  How many times has the Arab League come out in support of foreign intervention in a civil war within an Arab nation?

Cohen uses the Arab League resolution to criticize Obama for failing to take earlier action. How can Obama waffle when even the Arab League is on board with this? What Cohen doesn’t seem to realize is that the Arab League would never have been able to approve the resolution had it been the United States taking the lead in calling for foreign intervention.

Coordinated action by the international community is always slow and it is always messy. It has also been painful to read about the tremendous loss of life as the Libyan rebels have been beaten back by the tremendous firepower of Gadhafi’s forces. At the same time, by subordinating his own political interests to the specific needs of the situation, Obama has enabled the United States to play a significant but not overbearing or distracting role.  You could argue, for example, that Jimmy Carter’s quirky and unilateral response to the Soviet invasion of Afghanistan in 1979 distracted world attention from the true villains in the situation, the Soviets, thereby muddying efforts for more effective international action.

With rumors of our imminent demise greatly exaggerated, the United States is still leading the world.  We are still the 300-pound gorilla in the closet. But there are different types of leadership and different ways of achieving the same end. Sometimes true leadership is in allowing other parties to take the first steps.  This is a sign of strength, not weakness, and if you want to call that the Obama Doctrine, I guess that is okay with this Obama apologist.

3 Comments on “On Libya and the So-Called “Obama Doctrine””