On Spit Balls as Missiles and Pests As Criminals 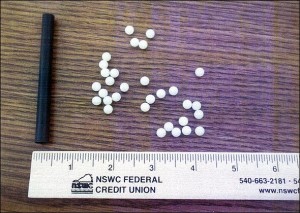 When I was in high school many, many years ago, using a plastic straw to shoot spit balls at the back of another kid’s head would have drawn, at the very most, a stern rebuke from the teacher. In today’s hyper-sensitive society, the straw would be a weapon, the spit-ball a “projectile,” the head a “vital organ,” and the same activity would lead to criminal charges and expulsion from school.

According to the Washington Post, 14-year-old Andrew Mikel used a pen casing to shoot plastic pellets at other kids in his high school in Spotsylvania, Virginia. Mikel was bored and looking for some attention. The three students he managed to hit with a plastic pellet propelled by his breath “flinched” and “looked annoyed.”

The school could have sent Mikel to after-school detention. They could have sent a nasty note home to his parents. Instead, school officials had Mikel expelled from school. They also called the deputy sheriff, and Mikel now stands charged with three counts of misdemeanor assault.

At first glance, Mikel’s actions would appear to meet the elements of misdemeanor assault in Virginia. If battery is the unlawful touching of another, assault is generally defined as the putting of another person in reasonable fear or apprehension of that unlawful touching. In this case, the plastic pellets did make contact with the bodies of three other students. And I have no doubt that this contact was unwelcome.

But Mikel’s foolish acts were clearly not what the Virginia legislature had in mind when it enacted the assault and battery statute under Section 18.2-57 of Virginia’s criminal code. And they were not what Virginia courts have had in mind in finding defendants guilty of the offense. According to one case which defines the offense, assault is “an attempt or offer, with force and violence, to do some bodily hurt to another by means calculated to produce the end if carried into execution.” The case uses the leveling of a gun at another person as an example of an action that could qualify for a conviction underneath the statute.

According to the Post, the federal Gun-Free Schools Act mandates that schools expel students who take weapons to school. The definition of weapon includes handguns, explosive devices, projectile weapons. Since when does a pen casing and breath-propelled plastic pellets constitute projective weapons? Where is the common sense of school officials and the sheriff’s office in Spotsylvania?

Said John Whitehead, president of a civil liberties organization in Charlottesville: “What happened to Andrew Mikel is an example of how oppressive zero-tolerance policies have become. School officials have developed a very dangerous mind-set that allows virtually no freedom for students, while at the same time criminalizing childish behavior.”

My first thought upon reading about this case was that I should probably turn myself over to law enforcement authorities in Massachusetts for committing similar offenses when I was Mikel’s age. And I could do this without fear of any consequences: I am pretty sure that the statute of limitations has long since passed.