On Politicians, Sex Scandals and Egos

I first learned about the Congressman Chris Lee thing through Ken at Popehat.  “Let me save you some time and embarrassment,” Ken posted yesterday.  “[A]in’t nobody wants to see you with your shirt off.  Not on Capitol Hill, not on Craigslist, not on Gawker. Go have a few drinks and forget about it.” 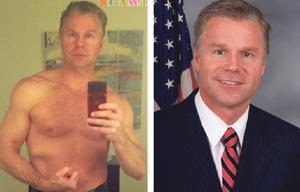 In a sign of how quickly things now move in this Internet age, by the time I read more about the story this morning in the Washington Post, we had already gone through the full news cycle. First, there was the revelation; in this case, the allegation that the second-term Congressman had sent a shirtless photograph of himself to a woman he met on Craigslist.  Second, there was the hint of denial.  His office initially claimed that someone had hacked into his email account.  And finally, there was the Congressman’s resignation and promise to work things out with his wife, all done within the space of three or four hours. As Ken wrote, there was no dragging this thing out over multiple news cycles.

My first reaction on learning about the story was:  Don’t these politicians ever read the paper?  Don’t they know that they will be caught?  Haven’t they ever heard of Bill Clinton or Wilbur Mills or Gary Condit or Mark Sanford or . . . forget it, the list is just too damn long. What is it about the sex drives of politicians that seems to make this type of thing seem so inevitable? What does it say about their arrogance that they always seem to think that they can get away with it?  Gary Hart actually dared the media to uncover his dalliance with Donna Rice.

I do think that it takes a special type of person to go into politics.  We don’t learn about the politician until he has already arrived.  It is like Tiger Woods in golf:  the person makes it seem so easy that we can’t fully appreciate all the hard work that led to the success. I think of Jimmy Carter driving around the country in an old beat-up car with Jody Powell, sleeping in a different bed every night and attending every sparsely attended fundraiser or event he could get himself invited to.  Or, in one of my favorite film clips of all time, there is a young John F. Kennedy standing out in front of some factory yard when he was first running for Congress trying to shake the hands of people who simply brushed by him.  He wasn’t “Pay Any Price, Bear Any Burden” President John F. Kennedy at that time.  He was just some poor schmuck trying to hustle up a few votes.

Most of us – sensible as we are – don’t have the stomach for this type of thing.  Then again, politicians aren’t like most of us.  They seem to have a special type of ego that protects them from the many rejections and humiliations they will need to endure in order to achieve their success.  It must be this same ego that gives them this feeling of invincibility.

← On Sticker Shock and Legal Fees
A Very Polite Robber →